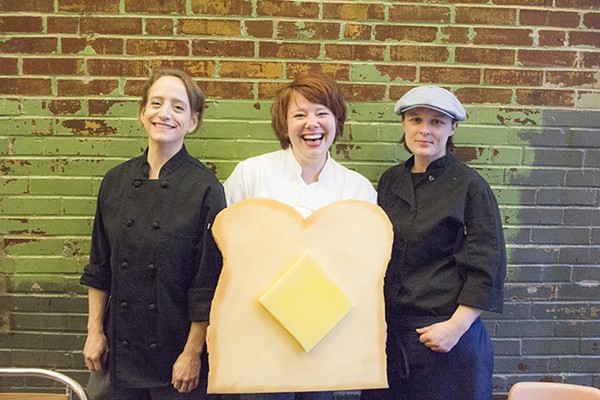 Chef Colleen Clawson has been a longtime resident of St. Louis' south side, but she didn't feel fully at home until she moved to McKinley Heights. Tucked east of Jefferson between Highway 44 and Benton Park, the small neighborhood gets overshadowed by its neighbors in Lafayette Square, Benton Park and Cherokee Street. But that, says Clawson, only makes it a hidden gem.

"People take walks around the neighborhood, and you see people walking out and about talking to each other much more than I have experienced in other neighborhoods," Clawson explains. "It's just more friendly here. There are a lot of families, and the kids and parents all know each other."

Clawson, who operates the neighborhood's tiny breakfast and lunch spot Milque Toast Bar (2212 S. Jefferson Avenue, 314-833-0085) with business partners Amanda Geimer and Rachel Moeller, moved to the area six years ago. Since then, she has seen many changes.

"I've seen it completely blossom in the time I've been here," she says. "When I got here it was pretty deserted. There was a string of buildings that weren't occupied at all. Now, there is so much going on, but there is still that opportunity to get an old building and really do something with it."

So what makes it so special? Clawson shares some of her favorite spots that make McKinley Heights such a colorful part of St. Louis.

McKinley Meadows
2257 Missouri Avenue
Clawson sees the McKinley Meadows community garden as the anchor of the neighborhood. Open to anyone — not just residents — the garden is much more than a place to grow produce. "There's a paper-making garden; we do poetry readings, workshops and all sorts of events here," Clawson explains. "It's definitely my favorite thing about the neighborhood."

Spare No Rib
2200 Gravois Avenue, #101; 314-202-8244
"I think this place is one of the town's unsung heroes," says Clawson. "The owners are also involved with Bar Italia and the Spare No Rib location in the Central West End. They do a brunch thing called Egg and have this dish called chakchouka that is kind of like a tagine — it's this tangy vegetable stew with eggs on top. It's to die for."

The Way Out Club
2525 S. Jefferson Avenue; 314-664-7638
"If you are feeling even remotely punk rock, this is the place to go," Clawson says. "You can still see rowdy shows here. It's like stepping into a time machine. My grandfather used to have a coin-operated machine business on the south side and they have some of his old machines in the basement."

Fritanga
2208 S. Jefferson Avenue; 314-664-7777
"Do you know about the guacamole here?" Clawson asks of the neighborhood's Nicaraguan restaurant. "They put eggs in it. No matter what kind of mood I am in I can always manage some of that as well as their gallo pinto. I cover it in tons of chimichurri. My son eats it by the spoonful."

Keypers Piano Bar
2280 S. Jefferson Avenue; 314-664-6496
"This is one of the city's most spectacular bars that no one knows about," Clawson shares. "It's a piano bar and they sing show tunes nightly. There's this woman there named Patty. She plays the piano and knows every song you could imagine. I don't know how she does it."