The Red Shack Is Now Serving Tex-Mex in Dogtown

Larry and Angie Lampert's Tex-Mex restaurant the Red Shack (6401 West Park Avenue) has risen from the ashes of their McCausland spot the Q-Shack to open in the heart of Dogtown.

The father-and-daughter team's new location sits on the corner of Tamm and West Park avenues. They’re continuing to offer affordable tacos and burritos, only this time in a brick-and-mortar building instead of a souped-up trailer. The Red Shack opened officially last Friday.

“We ended up here, and it just kind of worked out well for us,” Angie Lampert says. “It’s everything we did before. We do make everything ourselves. Our sides, our sauces, our meat; everything is made in house with our own recipes.”

The Q-Shack, the Lamperts' former operation on McCausland, closed after the property was sold in early March. It was a tiny space, a trailer in the middle of a parking lot — albeit a trailer with a huge partially covered deck around it for open-air seating.

Their newest location is a bit more traditional, and will be open year-round instead of only during the warmer months. They've remade a former insurance office into a small fast-casual taco and burrito shop with a walk-up counter, a good portion of seating and several Mexican soda options. Best of all, it's in walking distance of most of Dogtown's landmarks.

The Lamperts had originally opened the Q-Shack as a barbecue joint, but made the switch to Tex-Mex during their seasonal closing.

“It really just kind of happened," Angie Lampert explains. "More and more barbecue places are popping up everywhere. It's becoming one of those convenience things that you go to whatever's in your neighborhood." In St. Louis, tacos aren't quite as ubiquitous: “We know that gourmet tacos are going very well, so we wanted to come in between Taco Bell and Mission Taco.”

After some speed bumps with zoning issues, the daughter-father team began renovating the Dogtown building in late April.

Counter service is speedy. On the day we visited, most customers were in-and-out just minutes after ordering.

Angie Lampert says the first few days have been busy, and she believes the neighborhood is happy to have the Red Shack. 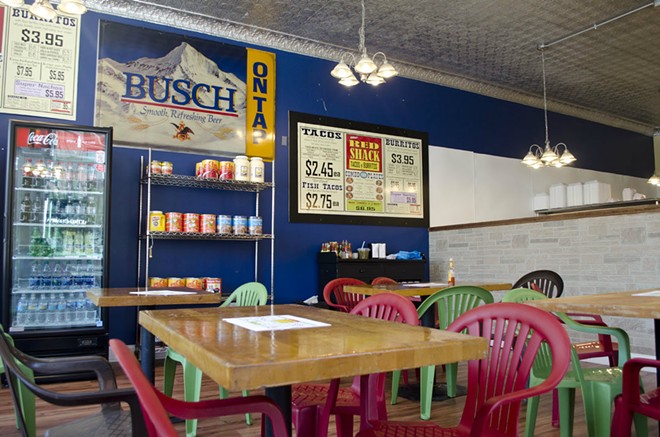