How Rise Coffee Became a Haven for Kids — and Adults Rise Coffee House is a neighborhood gem for everyone, even the little ones.

When you become a parent, you deal with an identity shift, and for many people, it can be hard to figure out how to adapt — suddenly, some of your favorite haunts don't feel quite so welcoming when you have a child in tow. Rise meets this challenge by offering a kid-friendly area with ingenious touches, even while remaining an urban coffee shop that's appealing to kid-free adult customers.

Located in the Grove neighborhood, Rise Coffee House (4180 Manchester, 314-769-9535) was started by Jessie Mueller, who is mother to Oliver, now four years old. Mueller says she had a rough time of it after having Oliver; she was adjusting not only to caring for a child while coping with postpartum depression, but also dealing with the shift in expectations and identity.

“I was new to St. Louis and came to the Grove and loved how welcoming it was, but saw that there needed to be a place where I could take my son and have him feel welcome, too,” she says.

The key wasn’t just creating a child-friendly place, but a place where people would genuinely want to go, with or without their children. And in that, she was tapping into something that many parents feel: When you have a child, you are slapped with the label of “mom” and some of the connotations that go with it may not feel very comfortable to you. Not every mom wants to wear “mom jeans” or drive a mini-van. (Though, hey, if you do, more power to you.) Mueller created Rise with the idea of a place she genuinely wanted to spend time, but with the conveniences necessary to keep her son happy, too.

Rise’s general manager Mike McKinlay says, “When Rise opened, the vision of Rise was to be like the Grove is, which includes everybody. Everybody feels comfortable coming to the Grove and the Grove embraces everyone.” Everyone including children — the kid-friendly room on Rise's second story allows kids to be free to play and enjoy themselves.

The play space is smartly designed. A pull-out wooden fence keeps kids in the playroom and prevents them from falling down the stairs (and saves their parents from running after them when they try to go down the stairs), in addition to separating the little ones from adults who might want more peace and quiet. A carved wooden tree hides shelves full of puzzles, trains and dolls, plus cleaning supplies for the inevitable messes. There’s even a changing table within the space — extra handy for those who have more than one child and don’t want to take both kids to the bathroom to change one of their diapers. There are also plenty of books and of course, a high chair, plus a kid-size table and chairs where little ones can enjoy their scones or play with blocks.

Rise also hosts “craftability” classes on Mondays and Thursdays, as well as sing-alongs for little ones once a month. McKinlay says, “Adults are allowed to have a bad day, but everyone freaks out when a kid has one.”

The Rise team wanted to make sure that even cranky babies are welcomed, and their parents don’t have to become homebodies if they don’t want to. 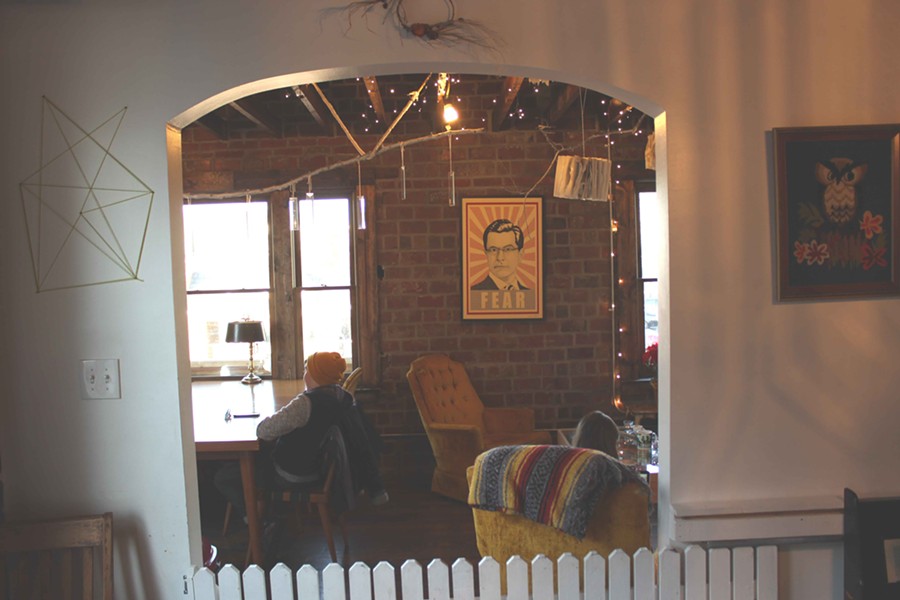 Rise’s welcoming attitude has made the coffee house a success, and in the fall the shop plans to move next door to a bigger space that will offer almost double the seats as the current building. Rise's business owner, Aaron Johnson, is adding some new touches and a full kitchen and bakery space. (Mueller owns the building that Rise is currently housed in, while Johnson owns the business.)

The quirky decor, though, is coming along for the move. And worried parents can rest assured: a kid-friendly room will be part of the new location, too.