The newest restaurant on Cherokee Street has been barely been open a week — and its owner is already planning for a day off, on May 20. But it's hard to blame him: It's not every day a guy graduates from high school.

Pablo Quezada is the chef/owner of Mexcla (2818 Cherokee Street), which opened last week in the spot that previously held Tarahumara and, before that, Siete Luminarias. He is also just eighteen years old, and only last month finished up his coursework at Gateway STEM High School. That graduation ceremony is the only thing standing between him and his diploma — and a full-time career as a restaurateur.


His experience belies his boyish grin. "I started working when I was sixteen," he says, and then corrects himself. "Actually, I was fifteen."

As Quezada tells it, his parents came to the U.S. from Mexico City when he was nine "for a better life," he says simply. (His father, who had been in the food industry, now owns a cleaning company.) They settled on the south side of St. Louis, and Quezada soon landed jobs at Diana's Bakery, the classic Cherokee Street Mexican bakery, followed by La Vallesana, Fuzzy's Taco Shop and Crazy Bowls & Wraps. He dropped out of school for awhile to work full-time, but returned in time to get that degree. (He'll be in nineteen in July.)

He also apparently got an education in those kitchens, because all signs suggest the kid can cook. The menu at Mexcla boasts both specialties from Mexico and around the world — and the list of South of the Border "basics" go far beyond the simplistic Tex-Mex fare you get at many St. Louis restaurants.

For one thing, Mexcla is one of the few Mexican restaurants in the city serving huaraches, the classic Mexico City dish of fried masa topped with meat, cheese and beans. (They get their name because they're said to resemble woven sandals.) At Mexcla, they are both huge and utterly delicious.

Also on offer (and also huge): the pambazo, a variation on the torta that also comes from Mexico City. White Mexican bread is dipped in guajillo chile sauce and then lightly fried before serving as the base of a sandwich stuffed with chorizo and potatoes. It's got the perfect kick — and it might be the best sandwich you'll eat this year.

Even if you're not an adventurous eater, there's plenty to try on Mexcla's menu. The tortillas are made in-house, and the salsas are plentiful, with seven different house-made options, plus a really good slaw of pickled nopales. You can even try Quezada's take on Chinese fried rice or a Middle-Eastern doner kebab — the flavors have a little Mexican twist, he says, but the dishes should still resonate even with people with a different heritage.

"I have a little bit of something for everybody," he promises. "People are coming here for stuff they can't find in other places."

The price point, too, doesn't hurt. Only two dishes on the current menu cost more than $10.

The look of the place has hardly changed since its days as Tarahumara, the Northern Mexican concept that lasted just one year. The space is still brightly lit and no frills. Just about the only addition is the hand-lettered sign promising posole on the weekends — and the cheerful pennants strung from the ceiling. A single flat-screen TV plays sports, while the same series of booths line the brightly colored walls.

But something tells us this restaurant will be around a bit longer than its predecessor. And we suspect this definitely isn't the last you'll hear of Pablo Quezada. 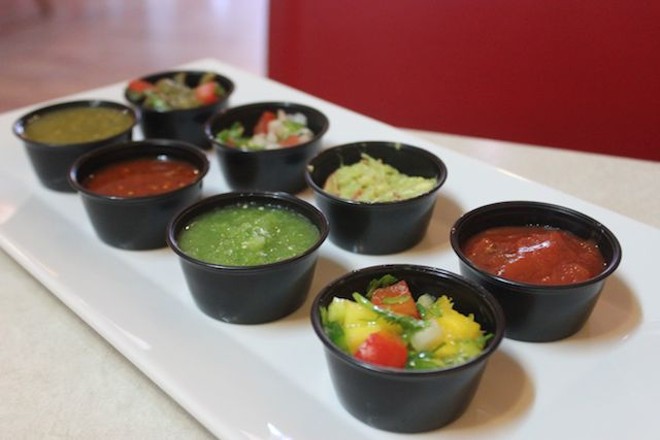