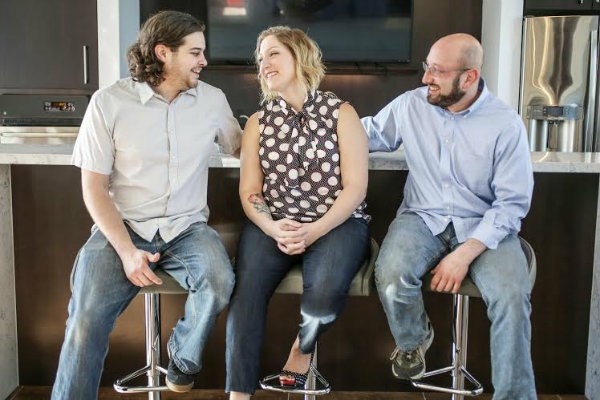 First it was recognized by Realtor.com as one of the hottest real estate markets in the country. Then, its city council voted to approve TIF money for the redevelopment of its vacant mall. And judging from what Yolklore's Mary Bogacki saw at its food truck event last Saturday saying goodbye to that mall, there is no doubt: Crestwood is on the rise.

"It was packed," Bogacki says. "I mean seriously packed with thousands of people. It confirmed what we were thinking — that now is the time for us to get in there and be a part of what's happening. It's a huge opportunity for us."

Bogacki has reason to be excited about what she refers to as the "Crestwood revival." After months of speculation, she and her business partners John Bogacki and Billy Oziransky signed the lease for their upcoming breakfast and lunch spot, Yolklore. The restaurant will be located at 8958 Watson Road, in the space formerly occupied by King Edwards Fried Chicken.

"Our goal was to get into a neighborhood that was going to be changing or up-and-coming and had community support for what we wanted to do," Bogacki says. "We looked at the space in Crestwood and were a little nervous because we didn't really know what was happening there. But when we called the economic development office, they told us about what was going to be happening with the mall redevelopment."

The chef-driven breakfast and brunch restaurant is the realization of a dream for the Bogacki, her husband John and Oziransky. All three have extensive backgrounds in the hospitality industry, including the Four Seasons and Strange Donuts for Mary, Old Warson Country Club and Bolyard's Meat & Provisions for John and the Four Seasons for Oziransky. The three envision a thoughtful, casual restaurant serving breakfast staples like bacon and eggs as well as more conceptual daytime dishes, such as a sweet and savory pancake roll-up. Their signature dish will be the "Nest Egg" — bacon, pickled onion, preserved lemon, cheddar and a sous vide egg wrapped in a biscuit. The restaurant will also take advantage of the building's drive-thru window, serving grab-and-go options to harried families.

The partners are raising funds for Yolklore via a Kickstarter campaign and are collaborating pop-ups with area restaurants, including one at Byrd & Barrel and a soon-to-be announced event with Urban Chestnut. However, now that the lease has been signed, they can't wait to get into the space and begin executing on their vision.

"I grew up going to Crestwood Mall, so it really hits home to me to see the area transcend into an amazing place to go in the city," Bogacki says. "I know we can be a part of that and help build it. All of the pieces are falling into place."