McArthur's Bakery Cafe Is Now Open in the Delmar Loop

The new kid in the block is open for business.

McArthurs Bakery Cafe (6630 Delmar Blvd.) opened its doors in the Delmar Loop for the first time this morning at 6 a.m. — and by 8 a.m., the place was already buzzing, with an early-morning crowd wolfing down free samples of monkey bread and cinnamon rolls. Both were delicious.

The opening comes less than five months after Saint Louis Bread Co. abandoned the 4,800-square-foot site. Bread Co. had resisted pleas from University City officials and even an online petition begging it not to abandon the Loop, which has suffered from a surfeit of traffic while trolley tracks are under construction.

But McArthurs seems likely to win over anyone who mourned the loss of the Loop's largest cafe/coffee shop. There's a similar vibe, with a friendly staff that keeps orders moving quickly, and a similar array of baked goods and casual lunch fare. You can even do a "half and half" instead of Bread Co.'s signature "you pick two."

Unfortunately for Coca-Cola lovers, there's even a similar soft drink situation: This is a Pepsi restaurant. The coffee is by Chicago-based Intelligentsia, which should keep java drinkers happy. 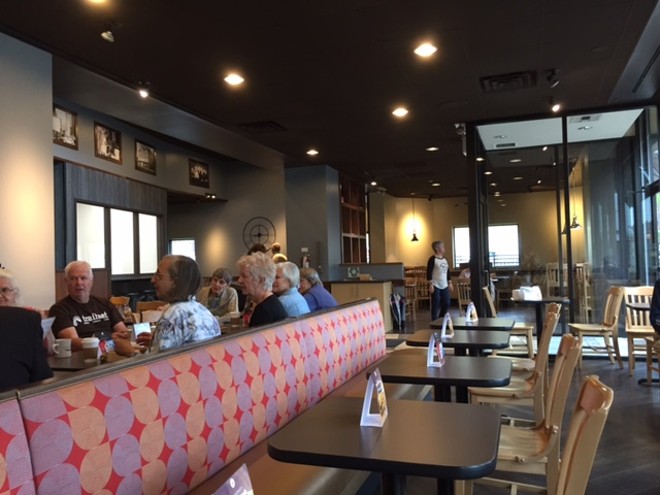 As it Bread Co., there are couches for lingering and tables for eating quickly. There's also a sizable conference room near the back with glassed-in doors — perfect for a private meeting.

This is the fourth location for McArthurs. The Kirkwood flagship opened 60 years ago; more recent additions are in Chesterfield and south county.