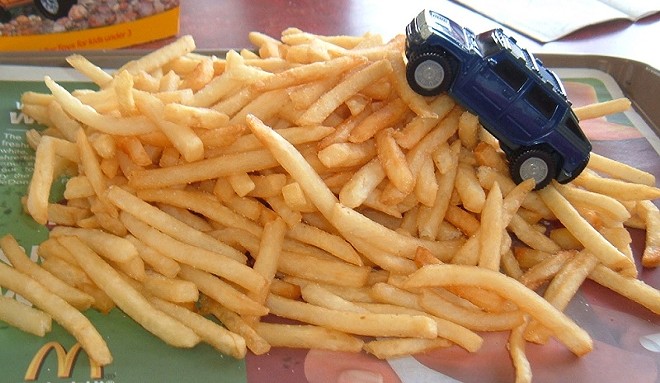 McDonald's French fries, a potato-ish amalgamation of chemicals and preservatives that taste pretty good when fresh and also fine when found on the floor of your car a few months later, have been one of the restaurant's most popular staples ever since Ronald McDonald's great-grandaddy first synthesized them out of leftover household cleaners or something in 1940. Their greasy saltness pairs well with the chain's other offerings, bringing the salty greasiness of those dishes to the forefront of flavortown.

"But why do I have to ever stop eating them?" you may be asking through labored breaths. "Can I not dine endlessly on this dimethylpolysiloxane-packed nutritional delight?"


Fret no more, my fried-food-fan friend.

An impending new McDonald's in St. Joseph, Missouri, will feature unlimited fries as part of its menu, the St. Joseph News-Press reports. Also included in plans for the 6,500-square-foot location are couches and armchairs for lounging, as well as table service, lest you find the need to stand or move and expend some of those new-found calories too taxing a proposal.

Owner Chris Habiger, a man who clearly just wants to watch the world burn, knows well enough to give his customers what they want — and what they want is heart disease.

“Today’s customers seek a comfortable and inviting atmosphere,” he told the News-Press of his apocalyptic plans. “So we’re committed to providing a modern look and feel to this restaurant.”

Now, you may be saying to yourself, "That's all well and good, but what if there was a way that we could make all the employees of the store hate their jobs and lives too?" Again, your concern is for naught; Habiger has that covered. The new restaurant will feature a fully customizable menu with scores of options, ensuring that your dedicated fast-food employee is endlessly trapped in his own special circle of hell while you sweatily stuff varying formulations of sodium acid pyrophosphate into your gaping food-hole.

“There really are hundreds of different choices to build the 'burger of your dreams,'” Habiger said of McDonald's food, apparently without irony. “Once you’ve placed your order you can find your seat, because we’ll bring it out to you.”

May God have mercy on us all.