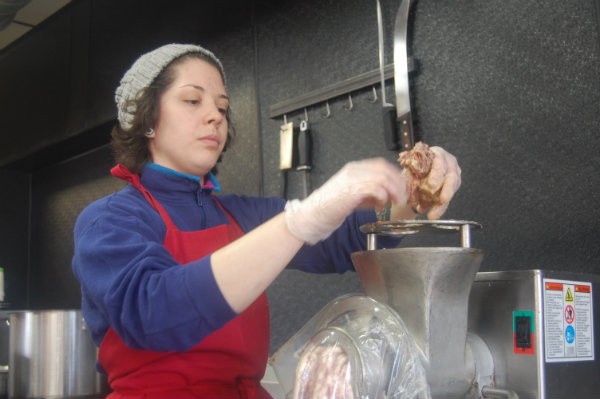 Ari Ellis, the executive sous chef at Southern (3108 Olive Street; 314-531-4668), found her inspiration for cooking in a most unlikely place — a boxed frozen dinner. "Growing up, my family didn't cook at all. Dinner consisted of puling Marie Callender dinners out of the freezer," Ellis recalls. "In actuality, that was the reason I started cooking. I knew nothing about it. I was twenty years old and could barely make a grilled cheese."

After graduating from high school and taking college classes without much direction, Ellis scoured the internet in search of jobs. Cooking intrigued her, but all the kitchen gigs she could find required a minimum of two years' experience. Determined, Ellis got into the business through the front of the house. "I weaseled my way into a job as a waitress and then begged my way into the kitchen," she explains. "I think once they realized I wasn't a good waitress they just let me back there."

As Ellis got her feet wet in the kitchen, she also worked a second job at Schnucks. There, a friend told her about an opportunity at Quincy Street Bistro. "I'll admit I lied to them a little about my experience," Ellis laughs. "I told them I was much more familiar with kitchens than I actually was."

Not long after she started at Quincy Street, chef Rick Lewis came in and changed the concept from a simple bar and grill where she "just fried stuff" into a place that cooked, in her words, "actual meals." She and Lewis instantly bonded, and when he was looking to hire someone to help him with Southern, which he opened last year in Midtown, he asked Ellis to be his right-hand woman.

In her role at the acclaimed hot chicken shack, Ellis is responsible for much more than fried chicken. On any given day, you'll find her preparing the housemade bologna, andouille, bacon and ham, as well as anything else Lewis throws her way. "I'm very lucky to have grown up in the age of the internet," Ellis admits. "If I don't know something or if Rick asks me about something, I'll look it up. Plus, I learn so much from him. When he describes something, it's like going to school."

Ellis took a break from the kitchen to share her thoughts on the St. Louis food and beverage scene, the importance of alone time and why, no matter how hard she tries, she can't make an egg sandwich like grandma's.

What is one thing people don’t know about you that you wish they did?
I'm really bad at remembering the names of people I've just met. Meeting new people is generally uncomfortable for me, so I get all caught up in my head and forget to remember.

What daily ritual is non-negotiable for you?
I need my alone time. I wake up extra early and sit in silence. Usually I'll eat breakfast, stretch, just generally get ready for the day. I spend all day communicating/talking to many different people. The silence and alone time are crucial to a sane me.

If you could have any superpower, what would it be?
My superpower would most definitely be the ability to fly. I have a huge fear of airplanes and being that high in the air with a whole load of people.

What is the most positive thing in food, wine or cocktails that you’ve noticed in St. Louis over the past year?
Mostly the amount of places that are opening up. Qui Tran from Mai Lee is opening a ramen place, Kitchen Kulture is about to put some roots down, Copper Pig, Reeds American Table — and there are many more on the way. It's exciting for me. I've always been a student of the restaurant I work in, so for me it's like a bunch of schools have opened up.

Who is your St. Louis food crush?
Andy Candy at Crown Candy. His last name isn't candy; it's something much harder to pronounce and doesn't rhyme nearly as good (editor's note: it's Karandzieff!). When I was at Quincy Street Bistro, I would go pick up the ice cream order most weeks. Andy was there in the thick of it, hammering out milkshake and ice cream orders for the never-ending line of customers. It's something I admire.

Who’s the one person to watch right now in the St. Louis dining scene?
I think we need to focus on the line cook or the dishwasher or the prep cook. The little-acknowledged person in the restaurant world. The person who relentlessly assembles your meal under the guidance of the ever knowledgable chef. (I'm very tempted to say that y'all need to keep your eye on me. I'm just getting started, I feel like.)

Which ingredient is most representative of your personality?
Salt noun \ˈsȯlt\ : a natural white substance that is used especially to flavor or preserve food.

If you weren’t working in the restaurant business, what would you be doing?
I can only hope if I wasn't cooking I would be working with horses. It's a passion of mine that I miss very much.

Name an ingredient never allowed in your kitchen.
That bright orange nacho cheese crap. You find it at the baseball stadium or gas stations. Cheese shouldn't come in that color or consistency.

What is your after-work hangout?
My after-work "hangout" is this real low key spot I like to call my living room.

What’s your food or beverage guilty pleasure?
Miracle Whip. I feel no shame.

What would be your last meal on earth?
My grandma's scrambled egg sandwich on wheat bread with Miracle Whip. I love my grandma. It's less about the sandwich and more about her making the sandwich. It never turns out the same when I try.