So, maybe we're jumping the gun on this a tiny bit — after all, the backers hoping to bring a cat cafe to Maplewood still need to raise another $5,000 to make it happen.

But after a single day on Kickstarter, in which Mauhaus Cat Cafe handily raised the first two-thirds of its goal, bringing in $10,530 out of its goal of $15,000, we think it's safe to say one thing: A cat cafe really will be coming to the St. Louis area. Hooray!!

Ben Triola and Dana Huth had previously told St. Louis Magazine about their plans for the cafe, which is modeled on shops in Taiwan that have since spread to the West Coast. Customers will be able to cuddle kitties while feasting on snacks and enjoying a cup of coffee or tea — although, the founders were quick to tell STL Mag's Lindsay Toler, it's not really about the food, or about the commercial aspect: “Our main focus in this, it’s not money, it’s going to be about the cats. We want them to be happy, and we want people to come enjoy them. That’s really what it’s all about.”

As the Kickstarter reveals, the Mauhaus team intends to partner with fellow Maplewood businesses La Cosecha Coffee, Traveling Tea and Strange Donuts. They will feature cats from Tenth Life Cat Rescue, all available for adoption.

And in case you're wondering about the whole hygiene thing: One side of the space will be the cafe side, where you can come in and get coffee and baked goods; the other side will be the lounge, where you can eat your baked goods while snuggling with the kittens who live there. Maplewood is on board for both components. (The city's community development director, Rachelle L'Ecuyer, even touts the concept in the Kickstarter video.) 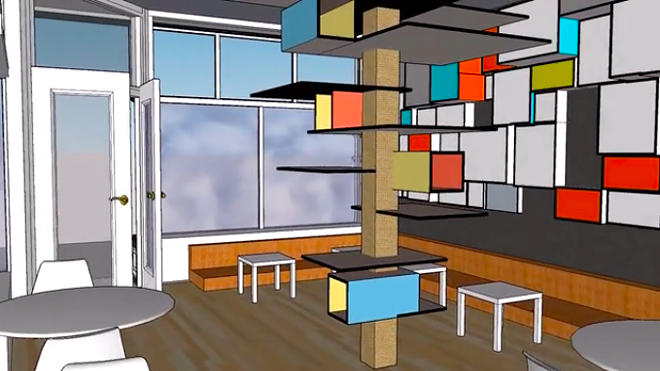 So, this is happening. The only question is whether you'll be one of the backers who gets to reap the promised rewards for contributing to the concept's Kickstarter. "Mahaus Merch Bundle," anyone? It'll set you back $100, but when you're helping cats, is there ever any downside?

Editor's note: A previous version of this story contained the names of two members of the Mauhaus team who were part of the St. Louis Magazine story, but no longer part of the project. We regret the error.