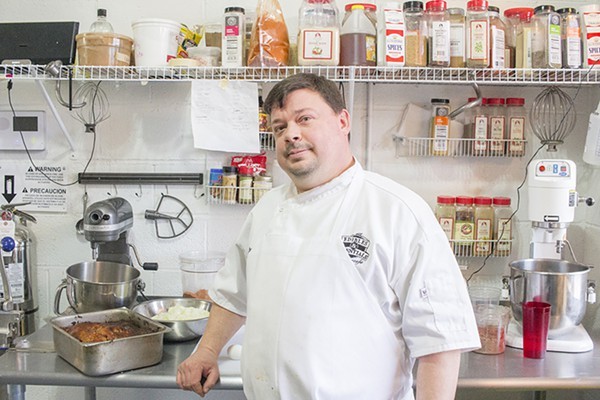 To say that Matt Borchardt's mom is the reason for his culinary career is a bit of an understatement — she all but forced him into it. "It all started when I was in grade school and asked my mom for $20," recalls Borchardt, chef/owner at Edibles & Essentials (5815 Hampton Ave., 314-328-2300). "She told me to get a job, so I found a little greasy spoon diner [and got a job] sweeping floors. Literally, that's how it started for me."

Young and impressionable, Borchardt was instantly enamored with the way things were done at the southwestern Connecticut diner. He especially liked the way that serving food could change people's moods for the better. Within two weeks, he added prep work to his list of duties and began helping out with cooking on the busy weekend shifts. By the time he graduated high school, he was hooked.

After a brief university stint, Borchardt returned to his native St. Louis and
enrolled in culinary school at Forest Park Community College. He loved the cooking aspect, but he could not shake the feeling that it would be better to educate himself outside the classroom. "School was never really my thing," explains Borchardt. "I dropped out and went directly into the restaurant business. I just started paying close attention."

Ironically, his first big industry gig was as an instructor for L'Ecole Culinaire, where he found that his passion extended beyond just food and into education. The school tasked Borchardt with running its small teaching cafe in Olivette — a spot that would serve as the inspiration for Edibles & Essentials.

"It was an open kitchen, and originally, we wanted to do a market and cooking classes," Borchardt recalls. "It didn't turn into that, but it's what I wanted to create here at Edibles. I get to be out front and chat with people — educate them. Not many chefs get to do that."

Borchardt took a break from making his signature white bean dip to share his thoughts on the city's restaurant scene and why you can't ask this St. Louis native the most St. Louis question.

What is one thing people don’t know about you that you wish they did?
LOL. I didn’t go to high school in St. Louis. I was born here but moved away during my high school years, so I don’t have to answer the proverbial question.

What daily ritual is non-negotiable for you?
My coffee and a glass of milk every morning. Sometimes I can go without the coffee.

If you could have any superpower, what would it be?
To fly, because ... why not?

What is the most positive thing in food, wine or cocktails that you’ve noticed in St. Louis over the past year?
Just the general development overall. We are seeing new genres of food, chefs collaborating on projects, and people pushing St. Louis’ boundaries. We are not just a meat-and-potato town.

Who is your St. Louis food crush?
In no particular order, Mai Lee, Acero, Carl’s Deli, Carl’s Drive-in, Nachomama’s Tex Mex — and if I’ve had enough beers, Jack in the Box tacos.

Who’s the one person to watch right now in the St. Louis dining scene?
I'm not sure if I get out enough to know right now.

Which ingredient is most representative of your personality?
Anything pork.

If you weren’t working in the restaurant business, what would you be doing?
Working on a beach in the Caribbean with my wife and children. Doesn’t matter the job, as long as my toes are in the sand.

What is your after-work hangout?
Considering I don’t go out much anymore, my own bar. But if I where to go out I prefer a place that serves Jagermeister or Fernet.

What’s your food or beverage guilty pleasure?
In no particular order, vodka, Jack in the Box tacos, pizza, Fernet.

What would be your last meal on earth?
My wife knows this very well. Just in case, it's a warm French baguette, salted butter and a bottle of Amarone. Very simple; no need for gluttony.