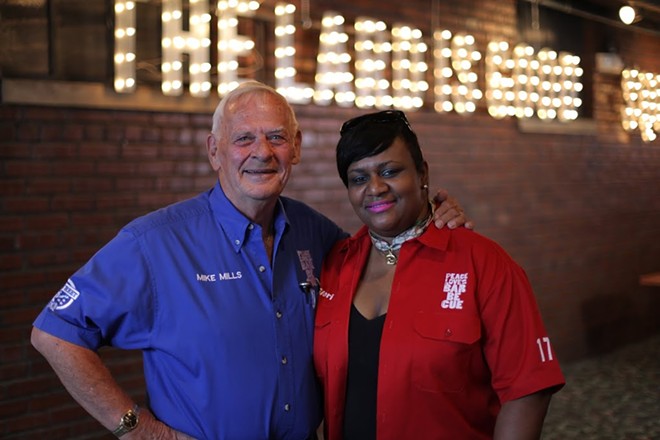 For a few hot summer days, self-proclaimed city girl Gloria McCollum found herself in the small town of Murphysboro, Illinois, for what she calls a "life-changing experience."

The St. Louis attorney, who goes by Glori Mac, had been invited to participate in a web series being filmed at the world-famous 17th Street Barbecue in Murphysboro, Illinois. It was three intense days of classes, cooking challenges and camaraderie, but Glori Mac came out the other side ready to open her own barbecue joint in St. Louis.

The new, six-episode YouTube series, produced by St. Louis-based Coolfire Studios, is part barbecue how-to and part storytelling, as each participant is looking to further their barbecue hopes and dreams.

McCollum, along with would-be restaurant owners from Michigan, Ohio, Canada and England, received group and one-on-one instruction in their quests to become better pitmasters and restaurateurs.

"I've always had a dream of having a barbecue restaurant," says McCollum. And her dream may soon become reality. With cooks standing by and a business plan in hand, Glori Mac is scouting locations and pitching investors. She's hoping to combine her newly-acquired barbecue knowledge with soul-food sides from her childhood at what may be called "Glori Mac's Smokehouse."

The web series is a first for the high-profile 17th Street Barbecue. While running the popular restaurant in Murphysboro for three decades, Mike Mills became one of the most prolific pitmasters in the country. Through success on the competition barbecue circuit and the popularity of 17th Street's Magic Dust rub, the brand is bigger than ever. With daughter Amy Mills, the pitmaster co-authored a book, Peace, Love and Barbecue, and runs the OnCue Consulting arm of the business.

An expansion on their consulting work, this program was crafted to address topics specific to each participant — whether customer service or racks of ribs. The viewers get to see it all.

17th Street emphasizes the importance of barbecue culture and connecting with the local community. "If people don't embrace barbecue as a culture, they're probably not going to be successful," says Amy Mills.

From meat smoking techniques and sides preparation to service and food truck operations, McCollum says she learned a lot during the experience.

All six episodes are being released today so, according to Amy Mills, you can "BBQ and Binge" rather than "Netflix and Chill" tonight.

Johnny Fugitt is author of The 100 Best Barbecue Restaurants in America, which includes 17th Street Barbecue.