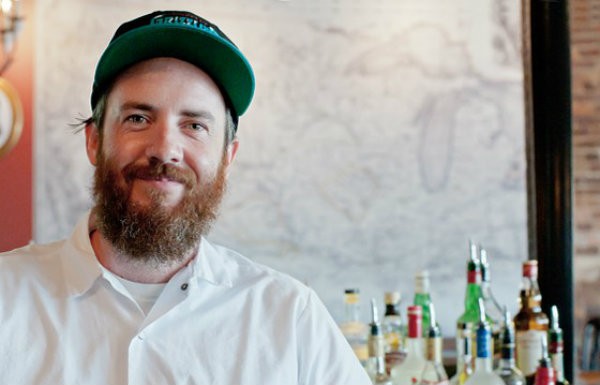 Don't try to rush out for one last taste of his cooking: Scott Davis has already served his last guests at Three Flags Tavern (4940 Southwest Avenue; 314-669-9222).

In a statement provided to RFT this afternoon, Davis announced that he left his position as chef de cuisine of the acclaimed Southwest Garden neighborhood restaurant this past weekend. He cites this as a "mutually agreed upon decision" between himself and owners John and Cathy O'Brien.

Three Flags Tavern garnered critical acclaim when it opened in March of 2014 (the Riverfront Times named it the best new restaurant of 2014), and there is no question that Davis was key in its success. From menu design to cocktails to the wine list, the Vancouver native had a strong hand is nearly every element of the restaurant's operation.

After relocating to town from Brooklyn in 2013 (his wife is a St. Louis native), Davis began working for Gerard Craft at Brasserie before being recruited by the O'Briens to open Three Flags Tavern.

In his statement, Davis praises his former bosses for supporting someone who was new to town: "I also want to thank John and Cathy O'Brien for their confidence in my abilities as a relatively unknown chef, new to the St. Louis restaurant scene."

In a conversation with Davis, the chef insists that he does not know what his future holds. "Really, I wish I did. I'm just going to take a moment to breathe and am going on vacation to Vancouver in a month." He's also looking forward to spending time with his son, who was born mere weeks after Three Flags Tavern opened. "We have a lot of catching up to do," he says.

One thing Davis will confirm is that he has no plans to leave the area. "My plan is to stay working as a chef in St. Louis," notes Davis.

I also want to thank John & Cathy O’Brien for their confidence in my abilities as a relatively unknown chef, new the St. Louis restaurant scene. I wish them the best of luck and am looking forward to pursuing new endeavors.


We are always hungry for tips and feedback. Please email the author at cheryl.baehr@riverfronttimes.com.