What Is the Most Overrated Restaurant in St. Louis? (UPDATED) 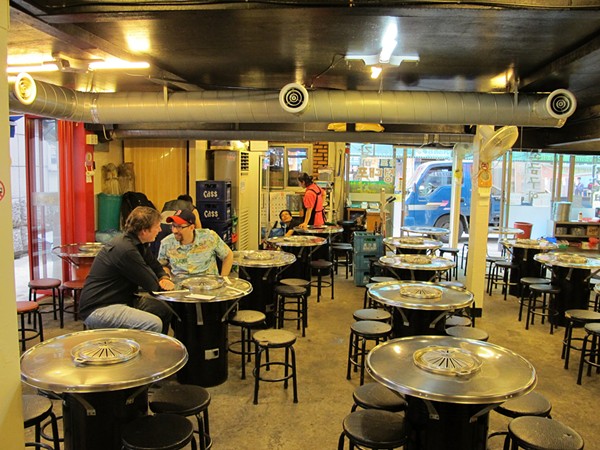 Update: We've pulled the plug on this idea. Thanks to all who contributed, but we're not continuing to a list of finalist. For our explanation as to why, please see our latest post.

You know that place that everyone's raving about that you think actually sucks? We want to hear about it.

Every Wednesday, RFT publishes critic Cheryl Baehr's restaurant reviews. Some of her reviews are glowing. Others are not. Many combine positives and negatives for more nuance.

Well-researched as those reviews are, though, they're still just one person's opinion. Which made us wonder: If you had Baehr's soapbox, what would you use it to take down?

So you tell us: What place do you think doesn't deserve the hype? Is it a trendy chef-run place with tiny plates frequented by naval-gazing foodies who can't eat without 'graming their meal first? Is it a place with a high rating on a site like Tripadvisor, Grubhub or Yelp? Is it a pillar of the St. Louis food scene that no longer lives up to its reputation?

We'll compile the best of your nominations and present a ballot for St. Louis' review and vote. 'Tis the season, right?

Submit your nomination by commenting below. For everyone who likes to comment on Facebook but not actually click on the article, you're out of luck this time; either leave your remarks in the comment area or email them to feedback@riverfronttimes.com. We'll take things from there and come up with a list of finalists.

Here are a couple of examples of what not to submit:

"I knew a guy that worked at Restaurant X and he said they copied all their recipes from someone else."

Here are examples of good nominations:

"All of the 'critics' seem to enjoy Restaurant X, but I visited and wasn't impressed. I thought the menu was a random collection of foodie buzzwords and didn't think the combinations of mains with sides made any sense. They are just trying too hard and we left disappointed."

"So many people talk about the food at Restaurant X, but I just don't get it. My coworkers always want to go, so I'm dragged along all the time, but I find it to be greasy and bland. I get that people are nostalgic for the place and it reminds them of their childhood, but any objective outsider would consider this food nearly inedible."

We'll close the nomination process in two weeks, so feel free to weigh in until March 3.

Johnny Fugitt is a regular RFT contributor and author of The 100 Best Barbecue Restaurants in America.