Taco Bell is playing it close to the vest with its new menu item, releasing redacted press releases and holding press conferences that raise more questions than they answer. (The Project Trinity-type secrecy invariably calls to mind the actual Project Trinity, which is the sort of comparison you'd think Taco Bell would want to avoid.)

The true nature of the mysterious foodstuff will be revealed in the first quarter of the Super Bowl (which itself makes one think of "blowouts"; Taco Bell's PR people are all out of fucks to give). In the mean time, fans of the Bell are invited to pre-order the new item for pick up before it's officially released. 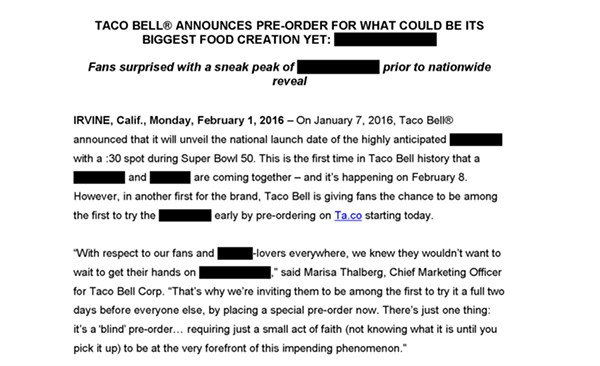 So what is this new food? What animal does it come from? How many layers contain its multitudes and what kind of sauce does it require?

We don't know — but here are our best guesses as to this mysterious foodstuff based on our intimate knowledge of Taco Bell.

6. Shame (no one who eats at Taco Bell has ever heard of it).

8. The 342-layer Burrito Mas Supremo, the layers of which include: cabbage leaf, tobacco leaf, papyrus, a page from your local newspaper, edible aluminum foil, melon rind, the husk of a huge cicada, and many, many more!

9. Organic, free-range donkey (still comes in that vacuum bag, though)

10. A salt lick, a 4-lb. bag of sugar and two scoops of fat in a Mountain Dew-flavored hard shell.

Because, well, fuck it.