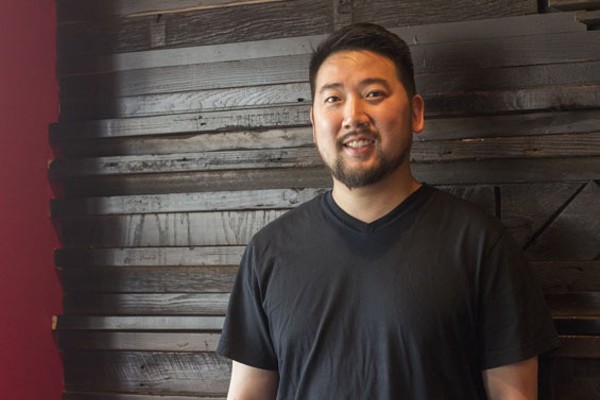 David Choi didn't exactly ease into the food truck business. "People think I am crazy, but our first day was Food Truck Fridays," he laughs. "Man, I could show you pictures of what we looked like after that night. It was nuts. I think we had a line of 50 people as soon as we opened the window. It made us learn really fast."

The immediate success of Choi's Seoul Taco (6665 Delmar Boulevard, University City; 314-863-1148) food truck validated his decision to take a chance on an untested business model. When he opened in 2011, food trucks were about as much of a thing in St. Louis as Korean-Mexican fusion. Though trucks like Kogi BBQ had been wildly popular in Los Angeles for a few years, the genre had yet to have its breakthrough moment in the Gateway City.

"Food trucks were a newer thing all around," Choi explains. "Things like food carts selling hamburgers and such were around for a while, but I saw that the truck thing was really starting to pick up. I figured if I sold my car I could afford do get one."

Choi may have been new to the food truck business, but he was well-versed in food. He grew up in a Korean-American household with parents and grandparents who were not shy about directing him in the kitchen. When he got older, he worked odd jobs at restaurants — pizza shops and fast food establishments — where he played around with different recipes. His biggest food gig, however, came from his time spent volunteering at a church in Naperville, Illinois, where he was tasked with cooking for 500 high school students at a time. "It's what gave me the confidence to cook for people," Choi says.

Now, less than five years after opening, Choi's Seoul Taco is synonymous with the city's vibrant food truck scene — but that's an increasingly small fraction of his business. His brick and mortar location of Seoul Taco was so popular he opened a second one, in Columbia, and is in the midst of opening a  third location in Champaign, Illinois. He's also shopping around for a new spot for his Korean barbecue concept Seoul Q, which he recently closed to make more room for Seoul Taco's ever-growing lines of customers.

Choi admits his growing empire is quite an accomplishment for someone who was just sort of winging it. "I never really had a five- or ten-year plan when I opened. It all just sort of happened."

Choi took a break from making his signature bulgolgi to share his thoughts on the St. Louis dining scene, the virtues of not stressing over dinner and why he's unapologetic about eating McDonald's.

What is one thing people don’t know about you that you wish they did?
I'm not a picky eater, so if you go out to eat with me I am cool with eating pretty much anywhere. Some people take too much time trying to figure out what to eat. I just enjoy having meals with the company of good quality people. Yes, it is always a bonus to have a fantastic meal — but not when you're stressing over it.

What daily ritual is non-negotiable for you?
Have to watch ESPN Sportscenter and play the guitar. Sometimes both at the same time.

If you could have any superpower, what would it be?
Teleportation, so I could travel to my other locations without driving! I think I put 15,000 miles on my car in two months.

What is the most positive thing in food, wine or cocktails that you’ve noticed in St. Louis over the past year?
Just traveling quite a bit, I always reference back to a place in St. Louis when eating out. I really believe we are blessed to have such amazing talented chefs in St. Louis. People are using fresh local ingredients and have built relationships with local farmers. This translates to a sense of community that brings everyone together by one common interest — amazing food and drinks.

Who is your St. Louis food crush?
It's so hard to pick just one — there are so many talented people out there. But it's Mike Emerson and John Matthews from the Pappy's family. Just how consistently good their food is and friendly their staff are at all their locations is astonishing. Those characteristics are definitely reflective of their personalities.

Who’s the one person to watch right now in the St. Louis dining scene?
Qui Tran. Everyone knows Mai Lee is amazing, but I am very excited for Nudo to open. Ramen takes a lot of attention to detail from the broth to noodle choice. Qui doesn't take shortcuts so I really respect and admire his passion for that. Plus, he's one of the coolest people you will ever meet.

Which ingredient is most representative of your personality?
Salt and pepper. I get along with everyone.

If you weren’t working in the restaurant business, what would you be doing?
Probably teaching students or doing some sort of work in the community.

Name an ingredient never allowed in your kitchen.
No restrictions. Being Korean you have to not waste anything so you'd better use it.

What is your after-work hangout?
On the couch watching TV with my English bulldog Champ. Also, If I wanted a good after-work food and drink, my go-to is Taste.

What’s your food or beverage guilty pleasure?
Being on the road a lot I still eat McDonald's on the regular. I know its not the healthiest, but hey, I still enjoy it.

What would be your last meal on earth?
I love sushi, so probably the omakase sushi tasting menu at any of the following three: Sushi Nakazawa's in NYC, Kabuto in Vegas, or Shiro's in Seattle. I'd eat until I could eat no more. For dessert, Pappy's ribs!