The Picky Eater's Guide to the Shack

The Shack (731 South Lindbergh) has a fun vibe and a good number of breakfast and lunch options for just about everyone.

We dined at the Frontenac branch (there’s also one off Big Bend Road in Valley Park), which has a surprising amount of personality for its strip mall location. The exterior’s reclaimed wood (with lime green accents) is marked with signatures from previous Shack diners.

Inside you’ll see more of the same – messages written in Sharpie cover the walls, and mismatched coffee mugs on the tables and colorful string lights above add to the atmosphere.

This breakfast and lunch joint serves a variety of omelets, pancakes, hash brown skillets, salads, paninis, burgers, smoothies and cereal shakes (with and without booze). Read on for more about what's at the Shack for vegetarian, gluten-free, paleo and young diners.

Vegetarian: For breakfast, there’s the Mrs. John Denver omelet, or you can build your own, with hash browns and an English muffin on the side. There’s also a veggie and egg white omelet that comes with a side of fresh fruit, a granola and fruit parfait, and an egg and hash brown skillet.

We tried the loaded greens skillet, which was okay but still lacked a kick even after adding a side of salsa to it. Pancakes and French toast round out the breakfast offerings.

For lunch, there are two vegetarian salads, a Caprese panini and a stuffed portabella sandwich. The Shack also offers four burgers or chicken sandwiches — note that these can be made with a veggie patty instead for an extra $3. (We'll admit, we find the upcharge kind of annoying since veggies are usually less expensive than meat.) It’s worth noting that the Shack has a pretty large menu, and may be able modify various dishes to make them vegetarian if you ask.

Gluten-Free: Yay! There’s a whole menu of gluten-free options for you! You might need to ask your server for the gluten-free menu, though; it’s not part of the regular menu and ours didn’t mention it to us until we requested it.

For breakfast, it includes four omelets (plus build-your-own), five egg and hash brown skillets, smoked salmon, three egg white dishes, a granola and fruit parfait, pancakes and smoothies. If you want some booze with your breakfast, check out the veggie or meat (featuring a beef jerky straw) bloody marys, “white trash screwdriver” or the mimosa. For lunch, there are four salads, brisket chili and several sandwiches and burgers. Sides include fries, chips and sweet potato tots (yum). 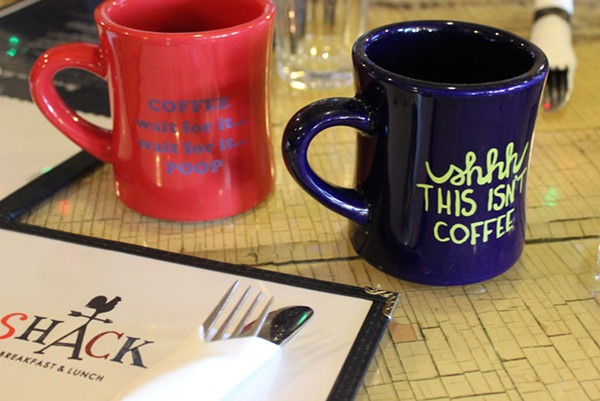 Paleo: All of the omelets have cheese, so you can order one of them without the cheese or go ahead and build your own, and forego the English muffin on the side. The Shack also offers smoked salmon, an egg white and turkey dish, a veggie egg white omelet and an egg white skillet on top of hash browns. There are seven other hash brown and egg skillets, but all contain cheese so you’ll need to order them without it. If you’re feeling adventurous, try the bacon-wrapped meatloaf.

For lunch, the Shack offers four salads, but you'd have to order them without cheese and/or croutons. There are many sandwiches (paninis, burgers, etc.) on the menu but none are Paleo; you’d have make multiple changes (minus the bread, minus cheese, breaded shrimp, onion ring, etc.) to make one of them work. You may want to stick with the breakfast options, and check out the “Meaty Mary” (minus the cheese cube) – it’s a bloody mary served with bacon and a beef jerky straw. 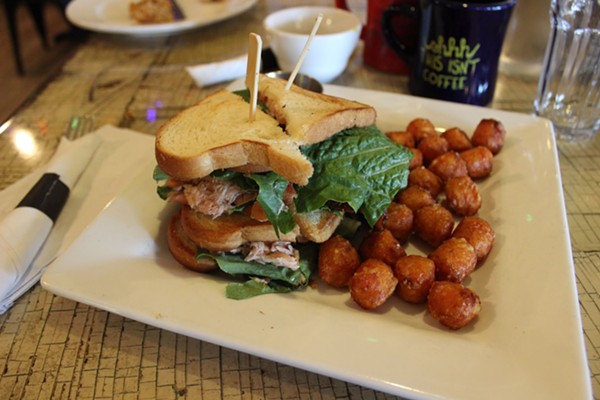 Kids: There’s a small kids’ menu of breakfast and lunch choices, and plenty of high chairs. Our young taste-tester loved the chicken fingers and fruit cup. From bacon-wrapped meatloaf to cereal shakes, the Shack has something for everyone — especially people who have the urge to do graffiti (in Sharpie) after eating or drink a bloody mary through a beef jerky straw.