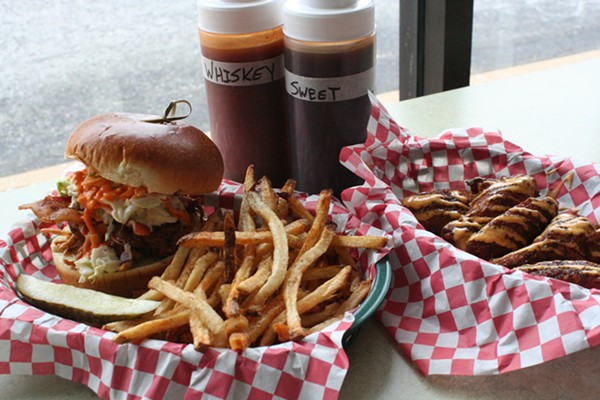 Another day, another barbecue restaurant in St. Louis. The newest, however, is a bit different. "We wanted to take a step back and take our time with everything," says Pitmaster and Co-Owner C.J. Baerman. Hence, Ol School Smokehouse (7565 South Lindbergh Blvd., 314-845-8585) was born.

Ol School's space, a corner storefront that sat empty for seven years after being vacated by Steak-Out, is just off South Lindbergh near I-255. Although the current space has a large kitchen, seating is somewhat limited. This will soon change, however, as Baerman and Co-Owner Shawn Orloski are busy renovating the space next door into a dining room. When finished, the restaurant will seat around 50 to 60 people and host a full bar. 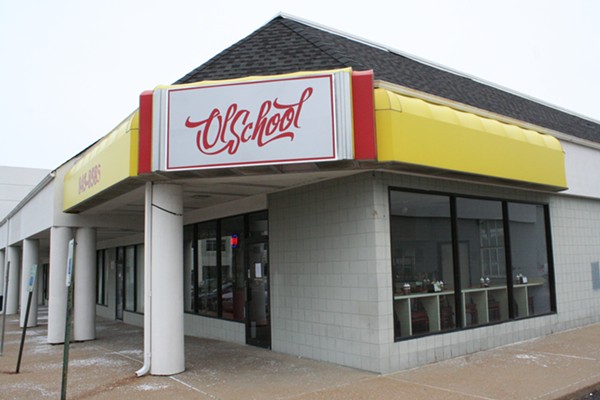 Baerman describes their style as "homestyle barbecue and comfort food." Expect the menu to evolve, but current offerings include pulled pork nachos and a house-made beer salami. A pit beef sandwich may either be "covered" in au jus or the whole sandwich "dunked" in au jus. As if that isn't enough, both sandwiches come with a side of beef gravy. Baby-back ribs, which Orloski recommends to a first time visitor, and "Whiskey Chicken" complete the proteins. Sides include the "Spicy Garlic Biscuit" and "BBQ Spaghetti," a dish most commonly seen in Memphis.

One of the main themes that Baerman and Orloski returned to repeatedly is how there are no cans in the kitchen, the freezer isn't even turned on and everything is made fresh daily. "Ol School is a set of ideals," says Baerman. "It's getting back to the way we used to do it." The restaurant is cutting its own fries, making its own sauces and pickling its own pickles — three items where you sometimes catch barbecue restaurants cutting corners. Even the sausages are fresh, says Baerman, and do not require the chemicals, phosphates and nitrates found in most sausages. 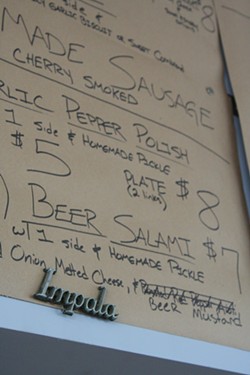 "We want to source as many things as we can locally," adds Orloski, "and keep things really fresh, current."

While Ol School is a new name and new venture, both Baerman and Orloski have resumes splattered with barbecue sauce. Much of Baerman's 17 years in the kitchen has been around barbecue; he's a regular on the St. Louis competition barbecue circuit. Orloski was actually the first non-family member hired by Bandana's and has been involved in various barbecue ventures over the years.

Ol School uses apple wood for the chicken and cherry wood for the sausages. A combination of hickory and cherry woods are burned for the pork and beef. Although Ole Hickory Pits is often considered the best commercial smoker brand on the market, and most commonly seen in St. Louis area restaurants, it could be argued that Ol School's use of a sophisticated smoker like this one doesn't quite fit with the way-things-used-to-be mantra. Still, it's hard to quibble with progress when it benefits the diner.

For our lunch at Ol School, we started with The Notorious P.I.G. sandwich — one of the more commonly used barbecue names around the country. (St. Louisan Burke Holmes, formerly with Pappy's and Bogart's, even opened a restaurant in Montana called The Notorious P.I.G.) We also had to sample the dry-rubbed wings and fries, both of which Baerman and Orloski bragged on.

The 36-hour process that makes hese dry-rubbed wings was time well spent. The dry-rubbed wings are so good, in fact, they should instantly jump into the conversation of the best wings in town. We were less enthused about the sandwich, but the wings and the lure of a handful of unique menu items will be enough to bring us back for a second look.

Ol School Smokehouse is currently open Monday through Saturday from 11 a.m. to 9 p.m. or until they run out.