Update: Sister Cities has been cleared by the city and will reopen Sunday, January 24 at 11 a.m. Travis Parfait and Pamela Melton tells us, "We will also be open this Monday, to help us recover. This could all end up being just a hiccup if we get a strong turnout over the next few days!"

The popular Dutchtown eatery Sister Cities Cajun & BBQ has been closed indefinitely after a driver skidded through the snow in the early morning hours and drove right into the South Grand Avenue storefront.

Co-owner Travis Parfait tells Riverfront Times that the driver, an older gentlemen, lost control of his compact Toyota and hit the building with such force, security footage shows snow falling inside the building. It even knocked out the electricity. When city inspectors visited the scene, they declared the property unsafe and ordered it condemned until repairs can be made.

"I can think of a lot better ways to get a day off that having your restaurant crashed into," Parfait says, drily.

Despite his joke, the problem is serious. Parfait and co-owner Pamela Melton has insurance. Their landlord has insurance. Even the driver had insurance. But, Parfait says, "We're the definition of a cash-flow business."

He adds, "Some people line up big financial backers and open a restaurant. But some people are dreamers who put everything into a bag and pray it works out. We're definitely the latter."

Parfait is not just worried about himself and Melton. He's got a half-dozen workers on the payroll, and his cook, for example, has a wife and kids: "If I can't pay him, he needs to find another job." And they know it could take months for the insurance situation to get sorted out.

The couple has launched a GoFundMe campaign to cover expenses while they remain closed and until they can get the repairs sorted out. They simply have no idea how long that will be, and they're panicking.

"I understand what the city is doing," Parfait says. "Until an engineer looks at it, they can't allow people in it. But my customers today pay the bills tomorrow."

Maybe the prognosis will be better than he's imagining, he says. "If we get to open by the end of the week, awesome. We'll have a great event to celebrate." But until he gets some good news, he's doing what he can to stay afloat.

Sister Cities opened in 2013 and quickly drew a following for its neighborhood vibe and barbecue-meets-New Orleans menu. Check out its GoFundMe page here. 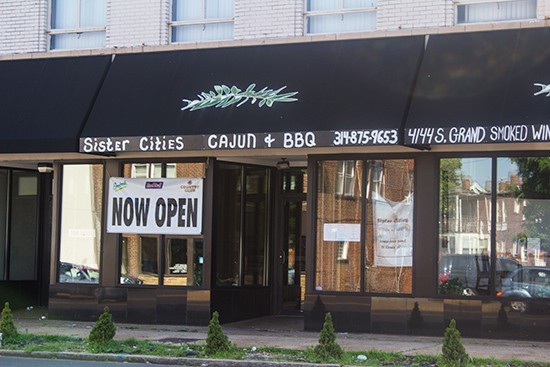