For Sanctuaria's Matthew Koch, Mixing Cocktails Is Like Playing Jazz 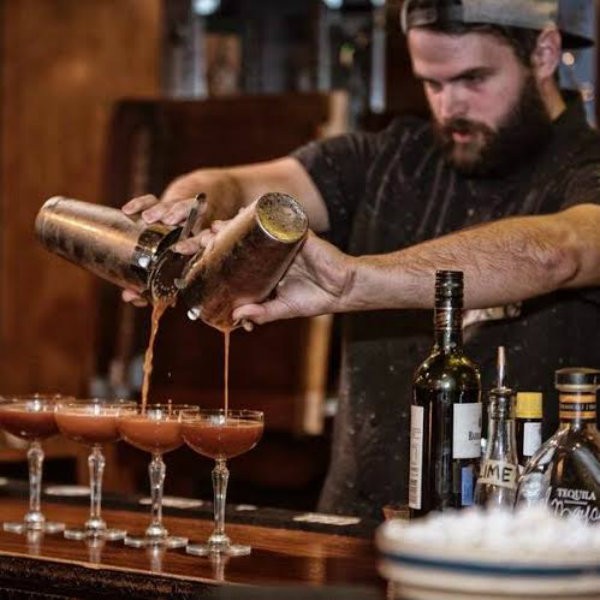 Matthew Koch, the bar manager at Sanctuaria (4198 Manchester Avenue; 314-535-9700), clearly remembers the drink that got him hooked. "I was 22 and still drinking dumb sweet drinks — you know, amaretto sours and that kind of stuff," Koch recalls. "I went to visit [Layla's] Tony Saputo at his work — we were in a band together — and just told him, 'You know your stuff. Just make me something.' He made me some bourbon-based drink with coffee elements and nutmeg. It was really cold outside, and it was perfect. I was like, 'Wow, this really speaks to me much more than just doing shots of Fireball.'"

Koch had been doing freelance work at a technical audio station and needed steady work, so he began "bugging" Saputo about his job.

"I need to do this," Koch recalls thinking after that fateful drink. And he didn't let the thought remain a thought: "I began studying and learning everything that I could." His quest for cocktail knowledge led him from Flamingo Bowl to Eclipse to Planter's House then finally landed him behind the bar at the Good Pie with Jeffrey Moll.

"Jeffrey approaches making drinks like he's using the scientific method," Koch explains. "He's precise and calculating. He'd have us do blind tastings and send us home with homework assignments to make a drink over and over again with different measurements. We called him the professor."

Koch credits Moll not only with expanding his knowledge of mixology but also the service aspect of the gig. "I learned the hospitality side of things from him," Koch says. "I learned the basics of find-dining service — how to explain things to people without sounding condescending. No one wants to feel stupid when they go out to dinner."

Sanctuaria was always Koch's dream job — so much so that he applied three times before finally getting the offer to run the bar. At the cocktail-focused tapas spot in the Grove, he's so busy educating his staff and creating seasonal drink menus that he doesn't have time for his audio career anymore. Still, he brings a little bit of his musical side to his current job. "It's a cliche, but doing cocktails correctly is like doing free jazz," Koch explains. "The reason it is cool is because you learn the rules first, then play around with it and make it weird. If you try to do it without knowing the fundamentals, it's just noise."

Koch took a break from the bar to share his thoughts on the St. Louis food and beverage scene, the ingredient that is never allowed behind his bar and his not-so-guilty quaffable pleasure.

What is one thing people don’t know about you that you wish they did?
I’m actually interested in what people are saying to me!

What daily ritual is non-negotiable for you?
Black coffee, or sometimes coffee with butter, and at least a solid 30 minutes of studying time. It can be cocktail books or research articles.

If you could have any superpower, what would it be?
Never being tired.

What is the most positive thing in food, wine or cocktails that you’ve noticed in St. Louis over the past year?
I’ve noticed most the newer concepts that have launched have really given the proper care and attention to their beverage programs — places like Reeds American Table, Retreat Gastropub, and Publico. St. Louis residents are smarter and more turned on than they were even a few years ago, which allows new places to thrive.

Who’s the one person to watch right now in the St. Louis dining scene?
I’m excited for Chris Bork’s new ramen spot, Vista, to open. I’ll be there probably too often.

Which ingredient is most representative of your personality?
I’m a pretty huge Jamaican rum fan. It’s weird and complex and good on it’s own, as well as an ingredient.

If you weren’t working in the restaurant business, what would you be doing?
Probably playing loud abrasive technical music on a stage in front of like six people.

Name an ingredient never allowed behind your bar.
Really anything grossly out of season. Also, sour mix.

What is your after-work hangout?
The Gramophone or Retreat Gastropub. I’m usually only good for one beer though.

What’s your food or beverage guilty pleasure?
It’s not that guilty, but a solid half Stag/half orange juice beermosa usually sets me right.

What would be your last meal on earth?
A negroni, fried chicken livers, a really good sipping rum, macaroni and cheese, a Margherita pizza, prosciutto, sauteed mushrooms and pork belly hash, finished off with a shot of Fernet.