We Tasted Folgers Perfect Measures — And Yeah, We Ate Them, Too 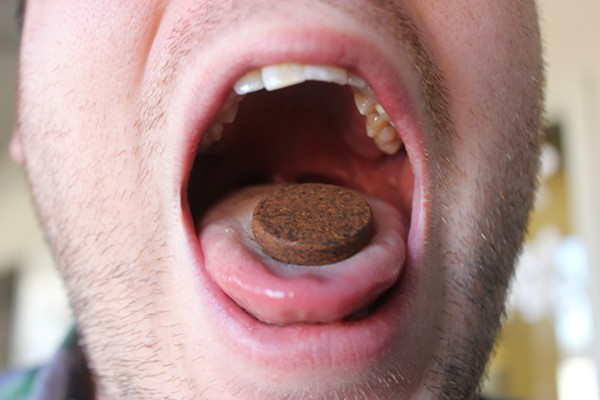 This is Folgers Perfect Measures, a new product from the makers of America's No. 1 coffee brand — as if Justin Trudeau hasn't already given us enough reason to plot a move to Canada. The new Perfect Measures are compressed tablets of coffee you simply drop in a filter — they take the "guesswork out of brewing a consistently great pot" — rather than, you know, relying on that clearly labeled scoop that says "two scoops equal one cup."

So this is Folgers' answer to Keurig, right?

No. These are literally compressed coffee tabs that you put in your standard drip coffee maker, just as you would ground coffee. Apparently, we've become so lazy as a society that scooping pre-ground coffee into a filter has become just too onerous a task.

So enter Perfect Measures, which look sort of like the java version of particle board. Or dog treats. Or those things you put under a piece of furniture to slide it across the floor.

St. Louis has been chosen as a test market for this new product. (Right now they're available in just four markets nationwide!) So an enterprising PR person at Folgers asked the Riverfront Times to sample these new feats of coffee engineering and tell you all what we think.

So, drumroll: We think they taste, pretty much, like Folgers.

But let's be honest here — we really wanted to know what would happen if we ate one. Just look at them. The quarter-sized discs beg to be placed on the tongue as if we're dropping coffee acid. Juvenile? Maybe, though it was an entirely better proposition than grinding one up and snorting it, as one of our staff writers suggested (in his defense, he was on a deadline).

And if they just wanted someone to drink these things, why send them to the RFT? There's a daily newspaper in town for that.

At first, the Perfect Measures tab didn't taste that bad — just a dry, coffee-flavored pellet. Maybe we were on to something. If scooping coffee is so difficult, why not cut to the chase and just start eating it like a mint?

Yeah, not so much. Remember, these are compressed coffee grounds, not instant coffee or coffee flavored powder.

The flavor started getting a little bitter — and chunky. After about twenty seconds, the bonds that hold the grounds together disintegrate, leaving behind a pile of actual coffee grounds in the mouth. So basically, it's like doing a shooter of coffee grounds out of the filter, only full strength.

Our test dummy may now have an ulcer.

Yeah, don't try that at home.

Just brew the stuff. Or go out and get a pour over.