Their meeting was as improbable as it was fateful. Tamara Keefe, the owner of Clementine's Creamery in Lafayette Square, was visiting San Francisco last month when she noticed a honeybear stenciled in a public space — and then another, and then another.

"I started seeing all these honeybears in different places," she recalls. "I thought they were really cool."

Then she and her boyfriend ended up taking a Lyft —- and it, too, bore a honeybear, this one wearing a doo rag. When she asked her driver what was up, he said it was a Tupac bear, and that it was the work of a local street artist named fnnch (pronounced "finch," like the bird).

An inveterate social media user, Keefe started following fnnch on Twitter. And then, she says, "a dialogue started."

At first it was just basic Twitter niceties, the kind of things you tweet at a stranger. But then fnnch noticed she was from St. Louis.

As it turned out, they didn't just have the city in common — the man called fnnch is an ice cream obsessive. His favorite San Francisco treat is Bi-Rite Creamery, although he knew them all.

Two days ago, fnnch made good on that offer — but not before he gave Keefe a little treat of her own. He swung by her Lafayette Square shop and, without tipping her off first, left his mark on the wooden bench outside her shop. Then he came in, had some ice cream, and finally met Keefe in person. She was delighted, on both counts.

Fnnch, who doesn't give his real name, says he makes his living mostly outside his street art — but that it's become his primary focus within the last year. The ice cream stencil he left outside Clementine's is the first time he's employed that image (before the bears, he did a lot of birds, after his childhood nickname, finch), but he plans to start putting it to use around San Francisco, too.

"I have ice cream probably four days a week," he admits.

A native of Kirkwood, fnnch moved to San Francisco for college and never left. But he comes back twice a year to see his parents, without fail, and he's excited to have finally put his mark on his hometown. (You can follow him on Instagram at @fnnch.)

He also left a honeybear in south city, on the building that houses the gallery of a street artist he admires named EYEZ.  He suspects he's not done with St. Louis just yet. "I did some scouting," he acknowledges. "It may be a good place to come back to."

Like many San Franciscans, he's pretty envious of what's going on in his hometown.

"Portland, Austin, St. Louis are picking up a lot of interest in San Francisco these days," he says. "If young people get together and want to do cool things, you can do it anywhere. And in St. Louis, you can afford to do it."

He's also pretty impressed with our ice cream. He was amazed by Clementine's manchego with truffles and honey — "it wasn't weird for the sake of being weird. It was savory," he marvels. He was further wowed by Keefe's boozy flavors, a trend that, he says, has yet to hit San Francisco.

"I think I sampled like twenty flavors," he says. 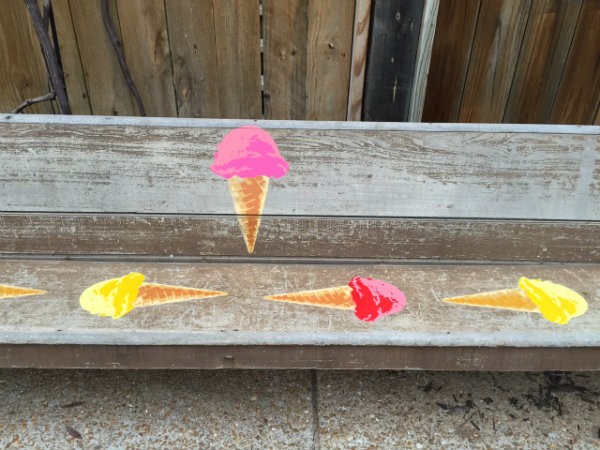