How Olio's Luc Michalski Uses His Improv Skills Behind the Bar 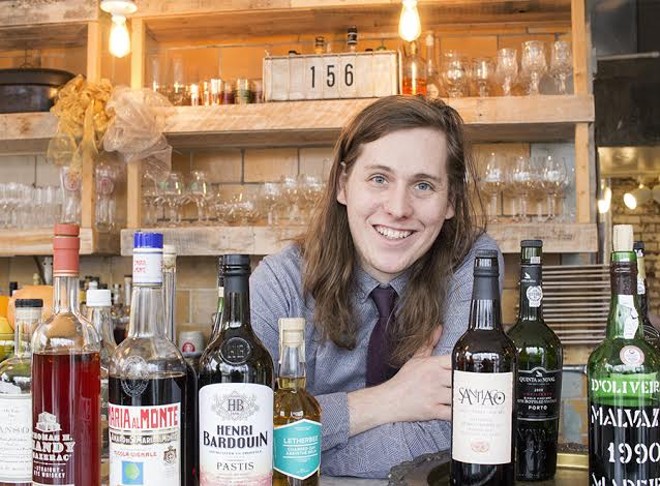 Luc Michalski of Olio (1634 Tower Grove Avenue; 314-932-1088) doesn't know why he never got fired from the Royale. "I was eighteen and didn't have any useful skills when I got hired there," he muses. "My friend worked there, so they hired me to juice and mow the lawn and stock. I was a kid and probably not a good employee. They shouldn't have hired me in the first place, and they definitely shouldn't have not fired me."

Michalski didn't have a plan for what he wanted to do professionally. He was (and still is) a musician, though he didn't think it would be a career. He'd taken improv classes at Second City in Chicago, but he was fairly certain he wouldn't end up on television. "Well, I guess somewhere I hoped Lorne Michaels would show up and fall in love with me, but realistically, I knew that wasn't going to happen," he laughs.

The Royale wasn't a plan, per se — just a place to make money. But then Michalski gravitated toward the service aspect of the business. He loved the idea of how you could cultivate regulars or make someone's night.

Then he discovered classic cocktails, and he was hooked.

"I thought it was so cool how there was this whole realm of 'old man' drinks out there," Michalski explains. "It just felt like I was blowing dust off of them. I kept studying and drinking and calling it research. Eventually it just snowballed into an obsession."

Michalski's first actual bartending gig was at the Bleeding Deacon, where he was promoted the week he turned 21 because someone failed to show for a shift. From there, he slung beers at the Silver Ballroom, but didn't get serious about cocktails as a profession until he landed at Sanctuaria. There, he perfected his preparations of the classics. "It's so interesting to me how you can take a few ingredients, but when done in the perfect proportions, they turn into something completely beautiful," he explains.

After a brief stint running a bar on Cherokee Street, Michalski was offered a job as head bartender at Olio and was eventually promoted to bar manager. "This is a dream for me," Michalski says. "Olio has always been one of my favorite bars, so to be able to curate the bar and sort of steer the ship is an honor. Plus, this is the sort of place where people go to for something special. To be able to make someone's night is a beautiful experience.

Michalski took a break from the bar to share his thoughts on the St. Louis food and beverage scene, rocking a Jedi braid, and why there's a time and a place for a roast beef sandwich with an ice cold Stag.

What is one thing people don’t know about you that you wish they did?
That I am an advocate for drinking vermouth. I get a lot of funny looks from guests and friends when I mention drinking it solo. I have a lot of love for a lot of vermouths. Sometimes it’s just perfect — great with food, before a meal or between courses. I think a lot of people think of it as the part of a Manhattan or martini that they don’t like, and that’s probably just from it having gone out of fashion for so long and being represented so poorly in that time. Buy good vermouth! Drink good vermouth!

What daily ritual is non-negotiable for you?
A big one for me is what I do right before bed. Having a little bit of quiet time to myself and having a nightcap is what keeps me sane sometimes, especially after work. When I’m so social all night and surrounded by people, it’s nice to hit reset and be alone with my thoughts, Netflix, a book or whatever feels right.

If you could have any superpower, what would it be?
Sleep would be optional. I’ve thought about this one. I love sleeping but sometimes I wish I didn’t HAVE to. So like, if I wanted to go to bed or sleep in I’d be able to but I wouldn’t get tired and be forced to sleep if I had stuff to do. I’d get so much more done.

What is the most positive trend in food, beer, wine or cocktails that you’ve noticed in St. Louis over the past year?
Simplicity. There’s no need to overcomplicate things, especially in cocktails. I’m more likely to order a drink that has only a few classic ingredients than one that takes a paragraph to describe it. I’m seeing a lot more places go back to basics and just do one thing really well, both in food and in drink. Urban Chestnut is a good example. So is Union Loafers. I think it’s exciting to see.

Who is your St. Louis food or drink crush?
Well, I don’t know if I should answer this one as I am a newlywed, but if I have to. The easy answer is Tony Saputo! The man has the best hugs, he’s incredibly talented behind the bar and otherwise, and he does so much to keep cocktails and spirits accessible and approachable. He works very hard to connect St. Louis’ bartenders through the U.S. Bartenders Guild and other events, and the dude deserves some respect. Not to mention he’ll be the first to tell you that he’s just one part in a great community of bartenders in St. Louis.

Who’s the one person to watch right now in the St. Louis food and beverage scene?
It’s gonna sound a bit biased here, but there are a couple in-house at Olio & Elaia that are exciting to watch and be around — chef Ben Poremba and director of operations Aaron Sherman. There is a new restaurant opening in our family soon (Parigi) and the things they are doing together for food and wine there are very exciting. Chef always has something to offer that I’ve never seen before and is always learning as well as teaching. Aaron is the most enthusiastic sommelier I’ve ever been around. He is so knowledgeable about restaurants as a whole and every aspect of wine. He’s been a huge help for me learning and growing as a bartender and I can’t wait to see what the two of them have planned for the new spot.

Which ingredient is most representative of your personality?
Probably lemon juice. It’s OK to be sour sometimes.

If someone asked you to describe the current state of St. Louis’ food and beverage climate, what would you say?
I’d say it’s underrated and booming, and I like it that way. I feel like St. Louis doesn’t get the national attention that it deserves, but because of that it stays feeling very homegrown, honest and connected. I feel like you can go have an incredible cocktail and really amazing meal, then go down the street and there’s a really solid craft brewery. There’s something new all the time, whether it’s bars, or delis, ice cream shops, breweries, and it’s everywhere. There’s always something new and exciting and you don’t need to spend your life savings to experience it.

If you were not tending bar, what would you be doing?
Probably getting into trouble somehow! I don’t know. I never had a plan for any kind of career, including bartending. I kind of stumbled into the industry when I was eighteen and ended up falling in love. All that said, I’d probably be a Jedi padawan. I’d love to rock that braid.

Name an ingredient never allowed behind your bar.
In a general, broad sense, anything artificial — got to have the real deal, even if it’s not the easiest route.

What is your after work hangout?
Well, I run another bar called Dino’s. It’s in my house. If I’m not there I really like great neighborhood spots with familiar faces and not giant crowds. I’m most likely to go to the Royale, Ryder’s or the little joint right next to my house.

What’s your edible or quaffable guilty pleasure?
Does Stag count? Does Lion’s Choice count? If those count, those are my answers but I’m not sure they do. I like to say there’s a time and a place for everything when it comes to food and drink, and sometimes nothing beats a Stag bottle or some roast beef.

What would be your last meal on earth — including drinks of course.
Oh boy. For drinks, Schlafly coffee stout or Gulden Draak and either Rittenhouse or a nice highland Scotch. …..and some kind of amaro. Santa Maria al Monte? Or all those things. Oh, and I wouldn’t need any food unless somebody wanted to order a pizza.