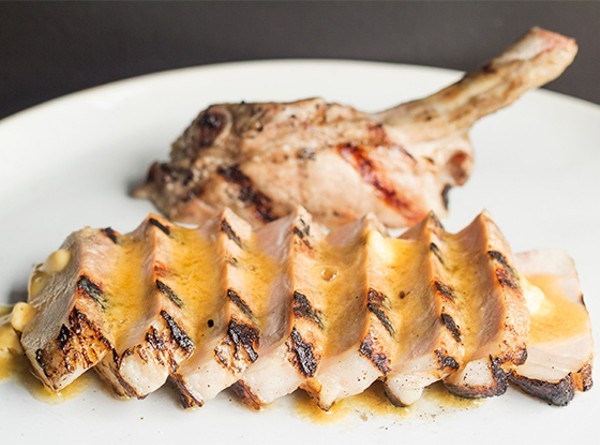 2015 was a difficult year to define in terms of dining. The trends of years past were certainly present — barbecue and fried chicken continued to dominate the dining conversation — but this was a decidedly more eclectic year than those of recent memory. It should come as no surprise then that the year's best dishes range from melted blue cheese on toast to fish stew served out of an old Taco Bell — and everything in between.

Here are my picks for the best new dishes of 2015, in random order.

1.  Braised Beef Cheeks
Reeds American Table, 7322 Manchester Road, Maplewood; 314-899-9821
Chef Matthew Daughaday got the idea for his braised beef cheeks from a recipe for chipped beef on toast he found in one of his grandmother’s old church cookbooks. His version, with its pot roast-like meat soaked in foie gras cream, is decidedly more highbrow, but every bit as comforting as the food that inspired it. Piled atop a thick slice of homemade focaccia, the juices soak into the bread like a biscuit dipped in brown gravy, while slices of oven-roasted tomatoes provide a spark that cuts through the richness. Reeds' menu is a parade of successes, but this dish may be its best.


2.  Bone-in Pork Chop
Público, 6679 Delmar Boulevard, University City; 314-833-5780
It should be difficult to name a favorite dish at a place where everything is impeccable, but it isn't. Público’s bone-in pork chop, infused with smoke from the wood fire, thinly sliced and drenched in peach habanero butter, melts in your mouth like a luscious piece of sashimi. This is one of those dishes that is so shockingly good, you find yourself waking up the next morning wondering how soon you can get another bite.


3.  Blue Cheese Toast
Milque Toast Bar, 2212 South Jefferson, 314-833-0085
If you’d planned on writing off Milque Toast Bar as a trendy, San Francisco-inspired artisanal toast shop, order the blue cheese melt and prepare to be won over. A half-inch layer of luscious blue cheese blankets a single piece of thick-cut pumpernickel, but there's so much more here. Louisiana hot sauce induces a mouth-puckering tang, and generous white pepper lingers as warm, back-palate heat. The concoction is softened by a flash in the oven, giving it a tawny, slightly caramelized color. Trend or not, this open-faced sandwich has staying power.


4.  Beignets
J. McArthur’s, 3500 Watson Road, 314-353-9463
Having never been to New Orleans, I can’t say whether J. McArthur’s beignets are authentic. Who cares? Such intellectual distinctions are irrelevant when you’re enraptured by one of these fluffy, powdered-sugar coated poufs. Somehow, chef Ben McArthur has managed to create a deep-fried hybrid of crème brulee and a cumulonimbus cloud that dissolves into an essence of sweetness the second it hits your tongue. Without a doubt, these were the best new sweet offering of 2015.


5.  Roasted Pork Sandwich
Union Loafers, 1629 Tower Grove Avenue, 314-833-6111
You could put just about anything on Ted Wilson’s impeccable bread canvas and it would be good, but chef Brian Lagerstrom doesn’t take the pass. Union Loafer’s signature roasted pork sandwich is about as perfect as it gets between two slices of bread. Thin slices of rosemary-kissed pork tenderloin and creamy prosciutto-like country ham are beautifully accented with mouth-puckering grain mustard and pickles. The best part, however, is when the liberally slathered housemade garlic mayonnaise squishes out through the bread's little cracks. For a bunch of loafers, this sandwich shows how serious the proprietors are about more than just bread. 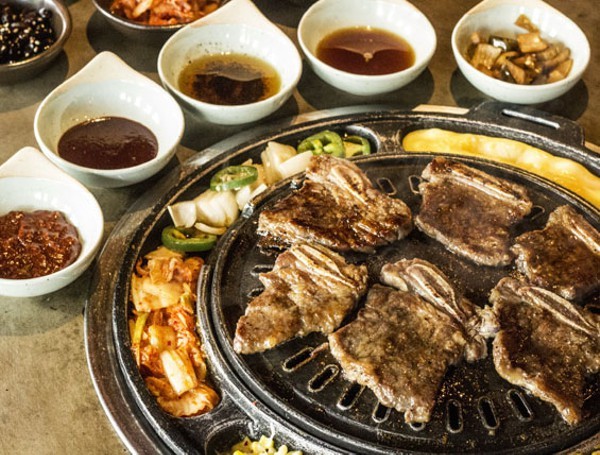 6.  Keema Samosas
Aroma Indian Grill, 7541 N Lindbergh Boulevard, Hazelwood; 314-830-7810
Pierce the flaky shell of one of the keema samosas from Aroma Indian Grill, and a fragrant plume of steam perfumes the air with the scent of cardamom and cloves. The large fritters, filled with potatoes, lentils and aromatic herbs and spices, make this Hazelwood restaurant live up to its name.


7.  Fish Stew
Chef Ma’s Chinese Gourmet, 2336 Woodson Road, Overland, 314-395-8797
Don’t be fooled by the exterior — Chef Ma’s Chinese Gourmet may have been a Taco Bell at one point in time, but now it is a bastion of authentic Chinese cuisine. Though the restaurant boasts both Americanized and Chinese menus, it shines brightest when Chef Ma is given free rein to come up with customized dishes based on his whims. If he’s taking requests, ask for is fish stew. The delicate, spring onion infused broth teems with filets of flaky whitefish, pork meatballs, assorted vegetables exotic mushrooms — one of them, a high-altitude fungus with a light umami flavor and silken texture, looks like an eggplant-hued sea creature. It’s an unexpected treat at an unexpected gem of a place.


8.  Pork Steak
Beast Craft BBQ Co., 20 S Belt W, Belleville, IL, 618-257-9000
If you are content with your current idea of pork steaks, do not go to Beast Craft BBQ Co. Enjoy your thin, Maull’s-covered piece of meat in peace without the knowledge that, about twenty minutes across the river, there exists something so mind-blowing it will shatter your pork steak worldview. Beast’s version is no less than three times the thickness of the traditional cut, giving it the feel of a double-cut Delmonico ribeye. There’s no sauce to be found here — just a glaze of fat, spice rub and char that glistens over the fall-apart meat. This is barbecue perfection.


9.  (Mild) Hot Chicken
Southern, 3108 Olive Street, 314-531-4668
Without a dunk in the hot chili oil, Southern’s fried chicken is outstanding — textbook-perfect seasoning, juicy meat and crisp exterior. Once dipped in the signature spicy sauce, however, it becomes so flavorful you can’t stop eating it in spite of the pain it causes. Beads of sweat form on the brow, hiccups ensue, the nose starts to run. Yet you find yourself so mesmerized by the combination of spice and subtle sweetness you keep going back for more — and this is the mild version.


10.  L.A. Style Short Ribs
Seoul Q, 6665 Delmar Boulevard #100 A, University City; 314-925-8452
David Choi isn't serving up Texas-style brisket or Memphis ribs, but his L.A. style short ribs show why Korean barbecue belongs in the pantheon of great grilling traditions. His version of traditional kalbi features ribs that are cut across the bone and flattened so they cook quickly. It also allows the deliciously sticky soy and brown-sugar marinade to coat more surface area so that every edge caramelizes. The result is equal parts bitter char and sweet candy — and some of the best barbecue in town.