Before establishing Luckys' Restaurant & Lounge (7529 Michigan Avenue, 314-833-3780), the new bar and grill in the Carondelet neighborhood, Brandon Martignoni had opened five other restaurants — including another iteration of Luckys' in St. Peters. But nothing prepared him for this one. “I promise I’ll never let this place go,” Martignoni says. “It was the hardest thing I’ve ever done.”

The St. Peters location, which opened in 2010, was originally called Mr. Lucky’s. But the “Mr.” was dropped after they received notice from the friendly lawyers of Hard Rock Hotel in Las Vegas, home of Mr. Lucky’s 24/7 Las Vegas Diner.

Wanting to open a second location, Martignoni and his wife Brittney considered the entire metro area before a real estate agent friend found a recently vacated space in Carondelet, which previously held Schoemehl's South Side Grill. The Martignonis renovated the space for about four weeks, but it was the liquor license process that kept the front doors closed for five months, even though the space had previously been a bar and had a liquor license. (Unlike the St. Peters location, Luckys' in Carondelet is non-smoking — city regulations ban smoking, with even exemptions being mostly phased out this New Year's, while the county still allows it.)

The space still has the look and feel of an old-school St. Louis bar. The tables are high tops, the bar is the focal point of the room, Golden Tee is in the corner and neon lights burrow select brands into the visitor’s subconscious. It’s the kind of place where motorcyclists have Busch for lunch and Natural Light comes in a bottle.

The menu covers a lot of ground and includes everything from expected bar foods to country favorites like chicken fried steak, fried catfish and fried chicken – are you sensing a theme? If beer makes you hungry for wings, cheese sticks, spinach artichoke dip or pretzels, the long list of appetizers at Lucky's has you covered. With a smaller kitchen, the menu is pared down from the St. Peters location, but is still much too large for the indecisive. 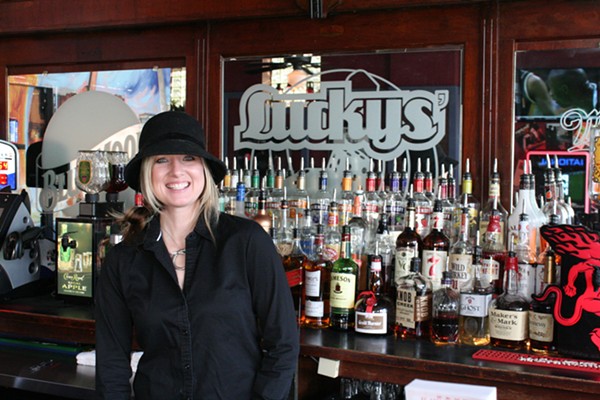 And despite Luckys' classic bar feel, “Our goal down here is to be a restaurant until 9 p.m.,” says Brittney Martignoni. The Martignonis want make downstairs a family-friendly dining destination, while the newly built bar upstairs will serve as an after-work watering-hole. The 21+ only upstairs includes pool tables and darts in addition to, yes, another Golden Tee video game.

With karaoke on Tuesdays, trivia on Wednesdays, Bar Olympics on Thursdays, acoustic sets on Fridays and karaoke again on Saturday nights, there will always be something going on upstairs. Once the weather gets nice again, there is also an outdoor beer garden.