St. Louis chef Bill Cawthon and his wife Jamie are bringing a new food truck to the streets of greater St. Louis today. Frankly Sausages, a gourmet sausage truck, isn't just for people on the go (or following the truck on Twitter): the Cawthons have formed a partnership with Six Mile Bridge Beer in Maryland Heights to serve food to the brewery’s patrons.

Thursdays through Saturdays, Six Mile Bridge customers will be able to order Frankly Sausages’ food from their servers and have their food delivered directly to them—without even having to go outside and interact with the truck. Think of Frankly Sausages in that context as a mobile kitchen rather than a truck that happens to be parked outside.

The truck debuts at the brewery tonight beginning at 5 p.m. — with food on offer all the way to 11 p.m. 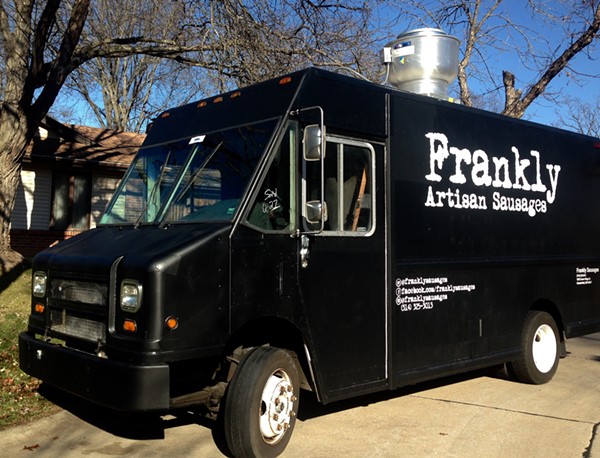 “We are literally an external kitchen for Six Mile, and they are our internal … dining space,” Jamie Cawthon explains. “We’ll be focused on our partnership with Six Mile for the first month or so, and then we’ll also be doing more events around the city.”

A St. Louis native, Bill Cawthon has worked in the restaurant business for more than five years, including under Los Angeles executive chef Vic Casanova. In L.A., he was the opening sous chef at Gusto, named one of the city's top restaurant by the L.A. Weekly, and in St. Louis served as chef de cuisine at Gerard Craft's Pastaria and Cardwell's at the Plaza.

When Bill Cawthon decided he was ready to branch out on his own, he recognized a hole in the St. Louis culinary scene. St. Louis has plenty of fried chicken and barbecue restaurants, but not so much in the way of gourmet sausages.

“St. Louis is all about simple concepts done really well, and Bill knew he could do that with sausages,” Jamie Cawthon says.

The couple considered opening a brick-and-mortar location and even had investors lined up, but Bill Cawthon decided that a food truck was the way to go.

“A food truck gives us the opportunity to sell really high quality ingredients at an affordable price point,” Jamie Cawthon says. “Where else in St. Louis are you going to get a … lamb sausage for $8.50? You’re not.”

Frankly Sausages makes nearly everything from scratch, with the exception of the Bolyard’s All Beef Frank, which is smoked by Bolyard’s Meat & Provisions. The truck will offer six sausages – three classics and three specials – made of pork, chicken or lamb.

One of the $7 classics, the Six Mile Bridge Session IPA Beer Brat, is served with sauerkraut and coarse ground mustard. An $8.50 lamb sausage, Mary’s Little Lamb, is topped with grilled red onion, feta cheese and oregano.

Hand-cut fries are also on offer in two sizes, with six dipping sauces. Among the sauce options are chipotle, rosemary kalamata and pesto.

The full menu is below: 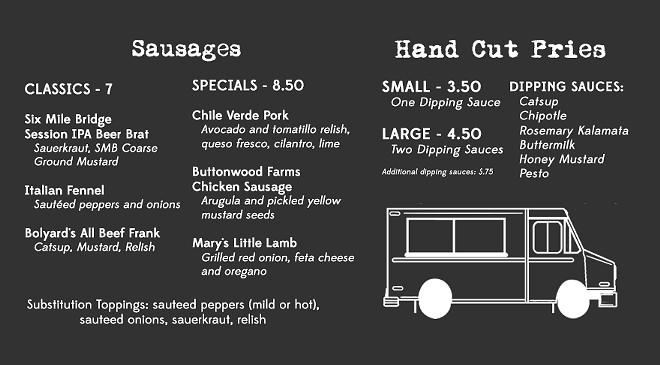