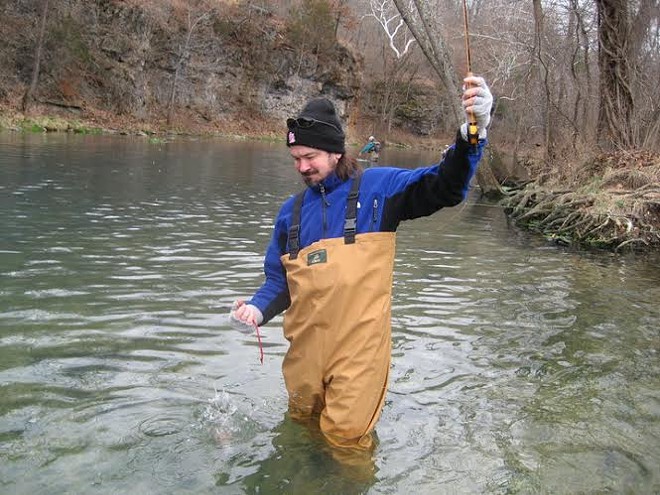 John Nash, the resident wine guru at Starr's (1135 S. Big Bend Boulevard, Richmond Heights; 314-781-2345) was an undeclared major at Southwest Missouri State University (now simply Missouri State University) in the late 1980s when he took a part-time job at the wine, beer and spirits chain Brown Derby. "I didn't have plans for what I wanted to do," Nash recalls. "Really, I wanted to be a rock star, but I realized I couldn't sing well or play the guitar."

Nash was only a week into the gig, however, when his life path suddenly became clear. "They had a really liberal tasting policy, and a wealthy customer came in and asked if he could open a bottle of wine while he shopped," recounts Nash. "It was a bottle of 1959 Chateau Latour — a legend. Here I was, some punk kid stocking the beer cooler. I felt like I had crawled out from under a rock."

He was hooked. Going forward, he took advantage of the store's liberal tasting policy and impressive collection of wines (going back to the 1940s and 1950s) to build his knowledge. "Back then there wasn't a lot of wine education, so I taught myself," says Nash. "I learned a lot by being able to taste — we tasted every day there — and I read Windows on the World (The Complete Wine Course) cover to cover, backward and forward."

Armed with his newfound knowledge, Nash moved to St. Louis and opened the Wine Merchant in 1992 at the young age of 27. It was his labor of love for roughly twenty years until a falling out with his partner resulted in him having to step away (Nash cannot speak about the details as part of the settlement terms). A non-compete agreement kept him away from the wine business for a year. "I did a lot of fishing during that time," Nash laughs.

Then legendary grocer Bud Starr approached him with an offer.

"Bud told me he was thinking about retiring in the next few years or so, and he wanted me to come on board," Nash explains. "When I started the Wine Merchant, Starr's was the place to beat, so I wanted to bring it back to that level."

Nash has injected new life into the specialty foods and liquor institution by doing many of the same things he did at the Wine Merchant. "I put in the original cheese department there, and I am increasing what we do at Starr's now," says Nash. "I'm biased, but I think we have the best cheese counter in town." He's also doing wine education classes and weekend tastings  and even convinced Starr to start smoking salmon and bringing in a large selection of fresh fish again because of customer demand.

"I've been doing this for 28 years now, and I still never get bored," says Nash. "It's always changing and evolving."

Nash took a break from the wine shop to share his thoughts on the St. Louis food and beverage scene, his favorite chocolate and why stores' like Starr's are the soul of St. Louis.

What is one thing people don’t know about you that you wish they did?
I’m originally from St. Louis. When I was one month shy of my ninth birthday, my parents moved to a tiny town in the Missouri Ozarks — Urbana, Missouri, with a population of 319. It was very “Andy Griffith” and my retired father (my parents were older) eventually got involved in local politics and held the mayor’s office for over a decade. My formative years were spent there and looking back it was a great place to grow up.

What daily ritual is non-negotiable for you?
Morning coffee… from Starr’s, of course!

If you could have any superpower, what would it be?
Flying.

What is the most positive thing in food, wine or cocktails that you’ve noticed in St. Louis over the past year?
I think that it’s the success of locally owned restaurants and independent shops like Starr’s. We represent the soul and culture of St. Louis and without them it would be a sad and sorry place here.

Who is your St. Louis food crush?
Mary Sly from Spencer’s Grill in Kirkwood. Best breakfast in town.

Who’s the one person to watch right now in the St. Louis dining scene?
No trying to jump on the bandwagon here — I’ve been a fan for a long time. For me it’s Qui Tran from Mai Lee.

Which ingredient is most representative of your personality?
Vinegar. Ha! I love great vinegar. I keep a wide variety at home and make my own vinegar too. Great vinegar is complex, versatile and essential to any kitchen pantry.

If you weren’t working in the restaurant business, what would you be doing?
I’d love to have a dairy farm and make artisan cheese.

What is your after-work hangout?
I’m a homebody, so I’d have to say my kitchen at home. We have a great kitchen — it's the main reason we purchased this house. It's large, open and free flowing. My family (wife and three kids) spend a lot of time in our kitchen.

What would be your last meal on earth?
It would have to be at L’Amis Louis in Paris. I’ve been there twice… once with my wife and once with Eddie Neill from Café Provencale/the Dubliner. I’d start with their legendary foie gras and then move on to their sea scallops and amazing roast chicken (basted with duck and goose fat) and crispy potato cake smothered in fresh garlic and parsley.