Most wild penguins reside in the Southern Hemisphere, but some miniature varieties can be found in St. Louis, more specifically at the newly opened Brickyard Tavern (3196 S. Grand, 314-771-9300).

Granted, the penguins at Brickyard are made of olives, carrots, and goat cheese, but it’s these touches of charming whimsy that set Brickyard Tavern apart from your average neighborhood sports bar. John Homer, the chef of Brickyard, solemnly expressed his regret that the penguin perched on our plate was missing its pickled onion scarf. We worried for a minute, but apparently, penguins don’t actually need scarves — though they look adorable. 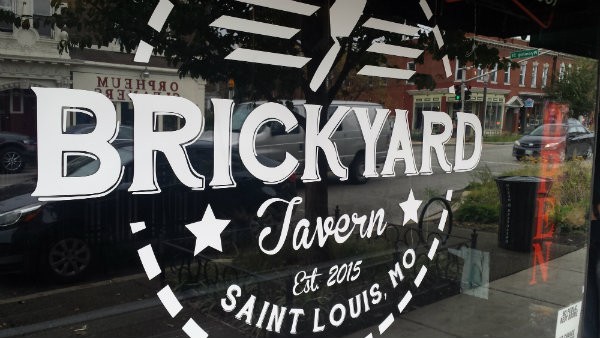 Brickyard Tavern is the new restaurant concept from Robin Schubert, Staci Stift, and Joe Thele. The trio previously owned Absolutli Goosed, which was located in the same South Grand storefront that now holds Brickyard Tavern. But even fans of the martini bar might not recognize it today, as the interior has been completely updated to reflect the new theme. Like a penguin drastically molting in order to grow new, pristine plumage, Schubert says it was time to turn over a new feather.

“We felt that the Goose had a good run. Back in 2002, when it originally opened, it was the only place of its kind, but the cocktail culture has boomed so much and we felt like we just got a little bit stagnant,” Schubert says. “After doing this for 13 years, we felt like doing something a little more laidback and a little more neighborhood as opposed to destination.” 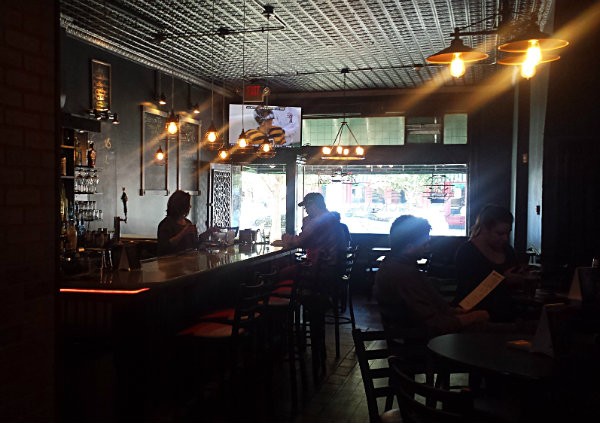 And in that endeavor, they have certainly succeeded. Brickyard is the sort of place where they prop the door open when the weather is nice, pass out candy on Halloween and banter good-naturedly with customers who come in and say “trick or treat, give me something good to drink.” Despite a complete turnabout in their direction, plenty of their former clientele aren't going away.

“We have seen a lot of old faces. Some people are curious who were regulars of Absolutli Goosed, curious to see what we did, what we’ve improved on, what we’ve changed,” Schubert says.

One of the most drastic changes has been evolving from a martini bar with only a few small items on the menu to a bar with a full — if compact — menu. The kitchen is small; there is no deep fryer or grill, but Homer hasn’t let that stop his creativity.

“I think we’ve hit all our bases as far as the menu goes,” Homer says. “It’s a small menu, but it’s very large.” 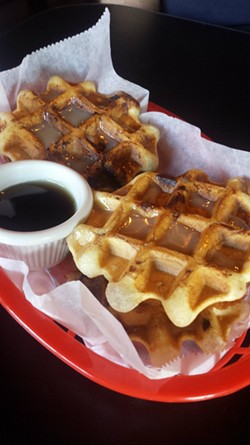 The menu also offers sliders, including a chicken & waffles slider that might just be the perfect brunch item, and wings.
“We’ve been open for about two weeks now and we’ve sold out of wings almost every day,” Homer says.

Brickyard Tavern’s tender wings come in a variety of sauces with one monthly special sauce. The current special sauce is called pumpkin spice, which seems both weird and basic, but proves to be just plain delicious.

To create his pumpkin spice wings, Homer cooks down an Irish ale — oddly not a pumpkin beer — until he reduces it to a syrup and then adds a few spices to the syrup. The resulting flavor has just a hint of pumpkin and a hint of sweet. It does not even remotely taste like the wing-version of a pumpkin spice latte, which is what we'd fearfully imagined when we tentatively asked to try that particular sauce.

If that doesn’t intrigue you, look out for next month’s replacement: Chocolate-Covered Cherry Balsamic wings.

As for Brickyard's name, it’s not a Nascar reference, Schubert says, chuckling, though you might catch Nascar on the TV at some point. The name actually pays homage to St. Louis’s brick-making industry in the 1800s, which explains the trowel embedded in their logo.

“We have so much in this area that represents different nationalities and ethnicities. We wanted to bring something that was very St. Louis to the area,” Schubert says. 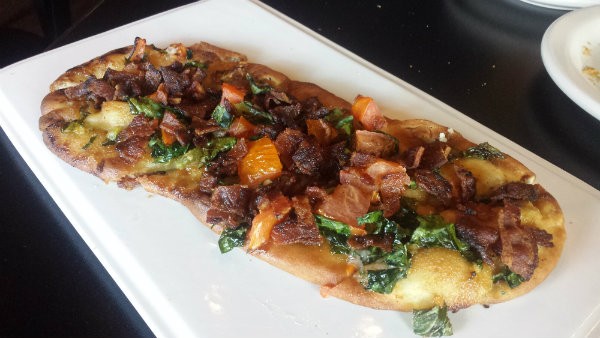 We welcome tips and feedback. Email the author at sjd889@gmail.com