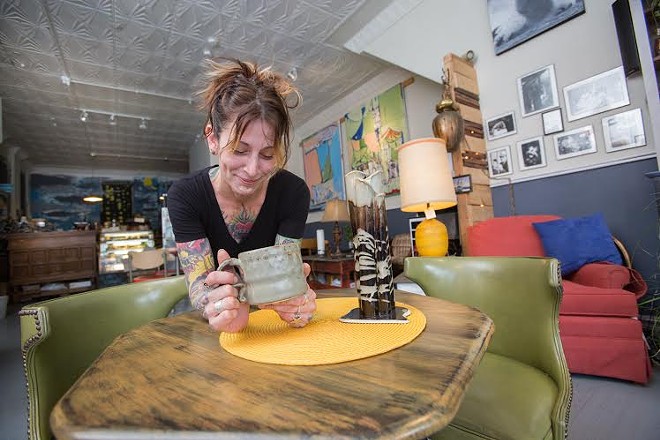 Nicole Mccormack sees her coffeehouse Restituo (4100 Shenandoah Avenue) as an extension of herself. "It's like I've combined all of my skills into one thing," she says. "I make all of the food from scratch and serve it on plates that I've made on my kiln. You get to drink the coffee out of mugs I've fired and sit on furniture I've refinished."

It's clear that Mccormack loves working with her hands — in fact, that's what attracted her to cooking in the first place. At the age of fourteen, the south St. Louis native was taken under the wings of Doc and Micci Parmley, the original owners of Mangia Italiano. She started as a dishwasher but was quickly given prep duties. Before she knew it, she was making pasta from scratch and cooking the restaurant's Italian specialties. "It was like I was doing an apprenticeship without actually knowing it," Mccormack recalls.

Mccormack worked in and out of the restaurant industry but didn't think of it as a career path until an unfortunate event gave her pause. While living in New York City, she fell gravely ill and looked to nutrition as a way of healing. "I was anemic and had to restore myself, so I began looking into herbs, spices and healthy eating," Mccormack explains. "It took my cooking to a different level. I began looking into ways to turn the fatty food I made into non-fatty versions while still making it taste good."

After returning to St. Louis from a stint in London, Mccormack found herself testing recipes on her family while trying to figure out her next step. Though she appreciated the coffee shops the city had to offer, she found herself pining for the places she would frequent in New York and London — cozy cafes where she could sip coffee all day and grab healthy sandwiches. When the corner storefront at Thurman and Shenandoah in Shaw came up for rent, she signed a lease and began developing recipes for Restituo. "I started out slowly," says Mccormack. "I just did breakfast at first, then added a small sandwich menu. I kept it small so I could play around with specials. It's just simple, healthy food."

Mccormack has been busy salvaging Restituo after a devastating water main break to the building, but she took a break to share her thoughts on the St. Louis food and beverage scene and her morning coffee ritual that doesn't involved drinking it.

What is one thing people don’t know about you that you wish they did?
That I don't use recipes for anything I do. It's all off the top of my head and flavor profiles are based on what I think might taste good together. I'm not formally trained; everything I know is from working around and with master chefs and watching way too many cooking shows. I just guess and take chances and often come up with things that have had my foodie friends asking where i got the recipe.

What daily ritual is non-negotiable for you?
Smelling fresh ground coffee beans before I put them in the filter. On the rare days I don't drink a morning coffee, I still have to take a few deep breaths of the beans.

If you could have any superpower, what would it be?
The ability to flash freeze. I do so many soups and having to ice bath them after cooking in order to get them to proper temperature and food safety standards of time and temperature in order to store them. With that ability I would surely gain enough time per week to actually watch a movie or two.

What is the most positive thing in food, wine or cocktails that you’ve noticed in St. Louis over the past year?
A larger surge in risk-taking, and greater emphasis on pairings.

Who is your St. Louis food crush?
Honestly, I don't get the opportunity to get out a lot at the moment. My days start at 6:30 a.m. and go well into 10, 11 or 12 a.m., so I can only answer this based on posts I see from friends that get out. I have a list of six places I have yet to get to, but based on pictures, I would have to say the Capitalist Pig.

Which ingredient is most representative of your personality?
Basil. There isn't much I won't do or try — food or otherwise. You can put basil on anything and everything from eggs, to curry, to chicken, to tofu and on and on. I guess I'm kind of a basil chick.

If you weren’t working in the restaurant business, what would you be doing?
One of my other crafts (that I still do, just not as often as I like) is that I am a licensed hairdresser. I still love to cut and color hair. If i could really do anything I would be a full time potter and would love to dedicate myself to glaze development.

Name an ingredient never allowed in your kitchen.
I wonder if you have ever gotten this one. Fish. I have allergies, and since I can't eat it, I can't cook it. Also the smell can slightly make me nauseous — and not because I hate it (like eww, fish). No! I want to eat fish. I just really can't handle it.

What is your after-work hangout?
I'm a rock n roll girl, so you will find me on my laptop (LOL) at CBGB or Silver Ballroom or out catching a band when I can.

What’s your food or beverage guilty pleasure?
Hank's Cheesecake. I have contacted them several times to start ordering from them to sell at Restituo, and without fail, each time I can't seem to place an order because I will eat the whole damn thing! As soon as I can procure some horse blinders, you'll see Hank's Cheesecake show up in my deli case.

What would be your last meal on earth?
A slow-cooked stew made from several cuts of steak with a ginormous side of heavily buttered wide egg noodles.