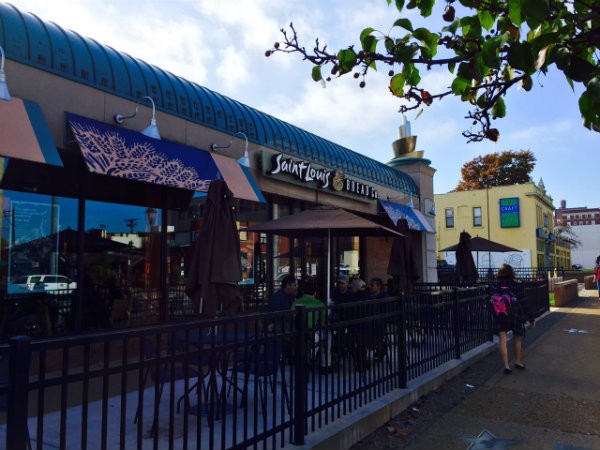 UPDATE: We've updated this post to include a statement from Panera. See the bottom of the post.

For years, the Saint Louis Bread Co. location in the Delmar Loop has been a constant in a sea of change — a community mainstay that's endured even as the Loop has transformed itself from a hippie hub into a thriving business district, complete with chains like Chipotle and Noodles & Co.

But this might be the end of an era — Panera appears ready to pull out.

University City Mayor Shelley Welsch recently confirmed the news on the UCity Positively Facebook group, telling residents there, "I have received numerous calls and e-mails from University City residents concerned about the planned closing of the St. Louis Bread Company location in the U City Loop. I am encouraging everyone who is concerned to write to the CEO of Panera Bread to request that the company reconsider closing this location. Bread Co has been in the Loop for years – I am told we had one of the first locations, if not the first."

Welsch referred Riverfront Times to the city's community development director, Andrea Riganti, but she could not be reached by press time.

Panera, the parent company of Saint Louis Bread Co., also did not respond to numerous requests seeking comment other than a quick email yesterday promising to respond shortly. They never did.

The restaurant is situated at the western edge of the Loop, which has been riddled with jackhammers and construction barrels as part of a planned trolley line. Business owners have complained vociferously that business is down all along the street. And another restaurant, Al Forno E, closed its doors last month.

But sources close to the situation argue that Saint Louis Bread Co.'s problem is less construction traffic — and more a case of rising rent from its landlord, Commerce Bank. In her message at UCity Positively, the mayor addressed that head-on, writing,

Commerce Bank should consider lessons learned from the old Gaslight Square – “too high” rents can kill a thriving commercial dining/entertainment and retail district. It is in Commerce’s interest to do what it can to support the success of the U City Loop. Please consider bringing the rent for this space more in line with the majority (but not all) of the other landlords in the U City Loop.


We'll have more on this story as it develops.

Soon after publishing, we received a statement from Panera. We've included it in its entirety:

For many years, the University City bakery-cafe has been privileged to serve and feel the support of our neighbors in the Loop. Last year we opened a new bakery-cafe in nearby Richmond Heights where we are able to offer our guests a larger dining room, additional parking and Panera 2.0 enhancements. With this new location, and the upcoming expiration of our lease, we will close our University City bakery-cafe at the end of this year. We’ll provide opportunities for all  associates and managers who wish to continue with the Company at other area cafes. Know that we are tremendously proud of our St. Louis roots and will continue to invest in Bread Co. locations that best serve its many communities.