A First Look at Reeds American Table in Maplewood 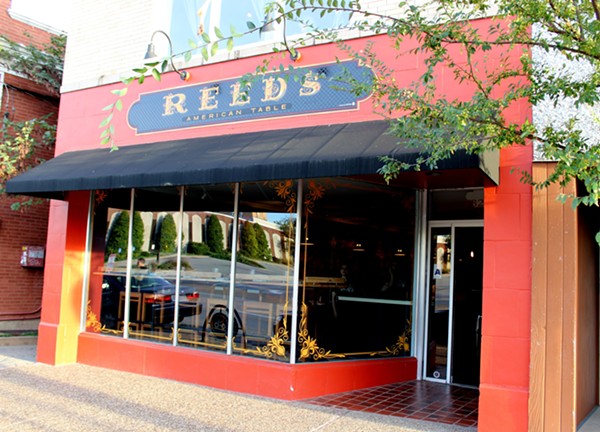 When Maplewood’s Home Wine Kitchen closed at the end of 2014, the sadness felt by many St. Louis food lovers was genuine. But all was not lost: In its place, the hotly anticipated Reeds American Table (7322 Manchester Road) opened about six weeks ago. At the helm is Chef Matt Daughaday, formerly of Taste and Niche.


Daughaday was looking for his next challenge when he began to consider opening his own restaurant. He spoke to Gerard Craft and others in the St. Louis restaurant community and got a lot of support – and also a lot of warnings about what to expect (delays, complications). He planned for Reeds to take four months to open. Between paperwork and perfecting the menu, it ended up taking about eight. And the chef says his team is still making adjustments.

However, Daughaday says, “I’m super happy about the support that everyone’s given and that people seem to be enjoying it. I feel good about the team we have. Everyone’s working hard and everyone has a good attitude about it.” The team includes executive pastry chef Summer Wright and beverage director Andrey Ivanov.

The menu, which Daughaday is continually tweaking, features the names of the staff, in addition to “the story” of the restaurant – why they have chosen these food and drinks for Reeds.

Daughaday says, “I want people to be able to come in here and be comfortable, and for it be that kind of neighborhood place where you are comfortable with the staff, with the menu, not a place that you have to change to go to.” According to Daughaday, there’s a school of thought in fine dining that you don’t need to know your server’s name because the service should be so great that you never need to ask for them. He believes differently: “I think you should know your server’s name, you should get to know a little about them and they should get to know a little about you. You should feel comfortable to asking questions.”

Comfort is the goal of the team at Reeds, and it’s also the inspiration for the food. The dishes have their origins in classic, homey, comfort foods.

The menu at Reeds American Table features cheeses, snacks, salads, small plates, sandwiches, large plates and a number of  desserts. There are several house cocktails, a great beer selection and a small but carefully curated list of wine from a specific region that changes monthly. In October, the focus is modern Spain.

While the menu isn't lengthy, it has a good variety to choose from: curry mussels, braised beef cheek, pastrami reuben, roasted pork loin, baked ratatouille, steelhead trout and more. The chef has elevated the food from its comforting origins; dishes are thoughtfully composed, and the ones we sampled were full of flavor. We couldn't wait to reheat the leftovers the day after eating there.

Reeds is currently open for dinner Wednesday through Monday from 5 to 10 p.m. It’s also open for drinks and a limited menu of snacks on Thursday through Saturday from 10 p.m. to midnight. Daughaday plans to serve brunch soon on the weekends from 10 a.m. to 2 p.m.

Salads and small plates range from $9 to $12, and large plates run from $15 to $20. If you sample multiple dishes and drinks, it may not be an inexpensive meal — but it will be worth it.

We welcome tips and feedback. Contact the author at laurenhmilford@gmail.com.