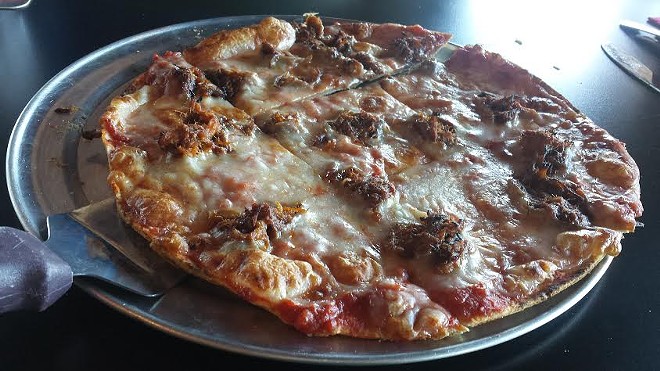 Frank Sinatra greets you at the front door. He tips his hat at you and suggestively smiles but doesn’t say anything. Jerk.

Well, maybe you shouldn’t be surprised considering his burger recipe — preserved for posterity, like all recent cultural detritus, online — was ordering Dean Martin to make him a burger and then drinking Martin’s 2 oz. bourbon shot — or maybe the whole bottle. Like all great chefs, Sinatra leaves his recipe open to interpretation.

At Frederick’s Steakhouse and Pizzeria (12490 St. Charles Rock Road, Bridgeton; 314-733-5500), which opened in late September in Bridgeton, the theme is clearly the Rat Pack, as evidenced by the person-sized cardboard cutout of Sinatra in the vestibule. Other famous actors from that period — Marilyn Monroe, Audrey Hepburn — also make appearances in the decor.

For the owners of Frederick’s, Frederick Waelter and Randy Waldman, the theme feels like home.

“That’s my era. I grew up in that era. I had a friend of mine that said, ‘Hey, you're not really going to put pictures of dead people on the walls, are you?’ But everybody we talked to loved the idea,” Waldman says.

The renovation process involved much more than hanging up a few pretty pictures. What started out as a simple updating of a few elements in the space, which was previously an Italian restaurant called Meglio’s, quickly turned into a complete overhaul. They gutted the interior and installed new lighting, walls, ceilings, among other things.

“Fred and I had the same vision. I'd wake up in the middle of night and say "Fred, that carpet's gotta go. I know we were going to try and use it, but it’s gotta go,’” Waldman says.

Funnily enough, that’s also how the idea of a steakhouse-slash-pizzeria was born — another product of a restless night’s sleep.
Even though Frederick’s has only been open for about a month, the restaurant has gone through some growing pains. Waldman admits that they weren’t prepared for the immediate and heavy volume of customers, despite a quiet, low-key opening.

“We know we’ve got hiccups to solve, but we’re hands on. We’re in here daily trying to correct any issues,” says Waldman.

And that's the most striking thing about Frederick’s: the dedication to the customers’ experience. Service is friendly and efficient, and the owners are very involved. On a recent visit, we ordered a steak medium-rare and instead received one that was well done. On the second try, the steak was rare. When we mentioned the discrepancy, they swiftly removed the steak from the bill. The owner also personally apologized, saying that the staff is all new and still learning. It was refreshingly different than the blame-game song and dance that usually accompanies such mistakes. 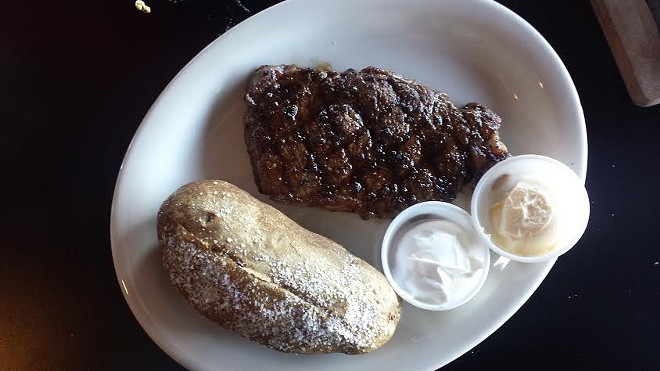 “It's about the food, but it's also about friends. We try and go to every single table, and we try and make friends out of customers," says Waldman.

The owners are also dedicated to the past — beyond having old pictures on the wall. Instead of a plain Italian or ranch dressing, they use Mayfair as their house dressing. The dressing was created by the eponymous Mayfair Hotel in downtown St. Louis and served at its restaurant, The Mayfair Room, St. Louis’s first five-star restaurant. Waldman proudly shared that he obtained the original recipe from its creator.

“For some reason we still haven’t perfected it. It's a vision, you know, and quite honestly, the last batch didn't come out,” Waldman says. “We have to get it right.”

The menu mostly sticks to steaks and pizza, but there are also soups, salads, sandwiches, fish, fried chicken, and so on. Lunch items range from about $7 to $12, which dinner options mostly say in the mid-teens. The most expensive thing on the menu is the Steak Sinatra, which was apparently created by Sinatra’s favorite restaurant in Palm Springs, at $25.95. Breakfast and desserts are currently in development.

The atmosphere of Frederick's depends on the time. During the day, it feels more like a diner/sports bar. Several large televisions are always playing with no sound. During the evening, the main lights dim and the primary lighting sources become the televisions, which can be a little distracting, and the red recessed lighting that wraps its way all around the room. The crowd is more mature. There is plenty of chatter, but never did it get so rowdy that it was difficult to hear someone at your table speak.

Also, in the evenings, there is live entertainment on Wednesday through Saturday. This past Saturday night’s entertainment was an elderly gentleman singing, you guessed it, Sinatra. He may not have been a great cook, but Ol' Blue Eyes definitely had a way with a song.

We welcome tips and feedback. Email the writer at sjd889@gmail.com