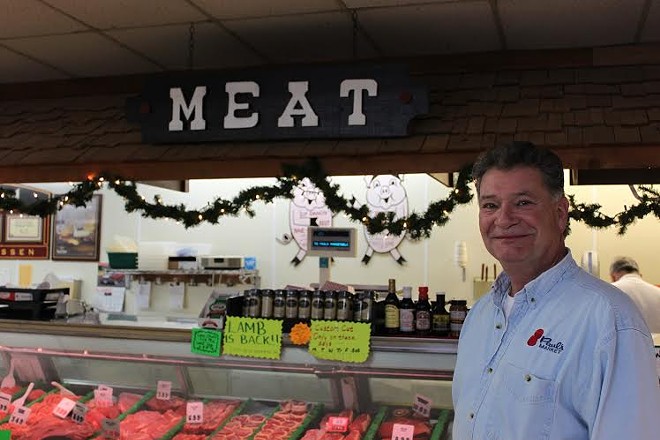 Gary Crump vividly remembers the day his father opened Paul's Market (1020 N Elizabeth Avenue, Ferguson, 314-524-3652). "I was in grade school at St. Sebastian," Crump recalls. "He let me skip school for the opening. Well, he let me skip a half day even though I wanted to be off for the whole day."

Crump is nostalgic as he gets ready to celebrate the 55th anniversary of what's become a Ferguson institution. Known around town as one of St. Louis' premiere meat counters and old-fashioned grocers, Paul's has been a mainstay in the north St. Louis county community since opening its doors in 1960.

Paul's Market has weathered many changes over the course of its half-century run, including a substantial dip in business since the unrest that followed the killing of unarmed teenager Mike Brown by Ferguson police officer Darren Wilson (Crump estimates sales are down by one-third).

Crump does not like to dwell on events, but rather uses them as a context for finding meaning in his business.

"I've lived here for 35 years," Crump says. "And what I am trying to do here — because it's my community and my lifeblood here — is to be like a piece of patchwork in a quilt. If I can make my little piece as beautiful as I can, hopefully that will encourage others to make theirs beautiful as well."

Crump's father, Paul, came to the grocery business by way of a variety of entrepreneurial ventures. Born in 1913, the elder Crump came of age during the Great Depression and learned that he had to find ways to take care of himself. Before the market, Crump Sr. had made money transporting people and things between Potosi and Steelville and briefly worked in the wholesale dairy industry. Though he'd never owned a grocery business, he took the leap, signing a one-year lease on the market to see where it would go. Crump Jr. knew instantly that he wanted to follow in his father's footsteps.

"I started out sorting soda bottles for my dad, but I was always enamored with the meat department," he explains. "I would help take apart and clean the equipment, and lay the sawdust and salt down on the counters at the end of the day. I've always wanted to be involved in the business."

Though things have been challenging for Crump over the past year, he made the decision to continue to invest in Paul's Market rather than walking away. "Violence is not the only side of things here," Crump insists. "People only see one side of things. This became a conscious, moral decision for me. Do I want to want to just throw my hands up and say 'screw it,' or do I want to maintain what I am doing because I care?"

With the help of Hussman commercial refrigerator supplier, Crump recently installed a new, energy efficient meat case. But the one upgrade he's most proud of is his Ole' Hickory smoker. "There's a lot of good barbecue in this town," he says. "We all have things we are good at, but I must say that our hamburger is pretty special."

This Saturday, Crump is hosting a series of festivities in the store's parking lot, including a barbecue feast and tastings from Ferguson businesses. He'll be serving his signature, freshly ground burgers on Saturday, along with his brisket and ribs. And as the smell of smoked meats permeates the neighborhood, he hopes to show his neighbors that he is here to stay.

"We have our third generation working here now," Crump notes. "Not many businesses, no matter what format, are able to survive that long, but we've been able to adapt to change and take advantage of it. We're just a real community kind of place."