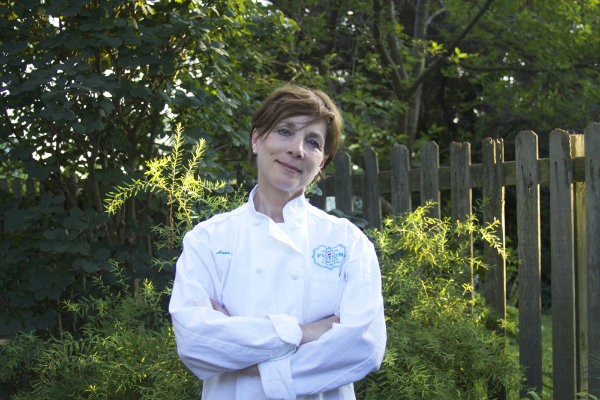 The executive pastry chef at Pastaria (7734 Forsyth Boulevard, Clayton; 314-862-6603), Anne Croy, parlayed her fine arts and architecture studies into a successful career in furniture design. For twenty years she worked her way up in the field, serving as design director for two different companies. It allowed her to put her two children through school and was a lucrative creative outlet. But it didn't have her whole heart.

"Cooking is my first love," Croy confides. "I've always loved cooking and knew I would come back to it. I would map out my route home from work based on the ingredients I had to pick up for that night's dinner."

See Also: Brasserie's Nick Blue Keeps the Attitude out of the Kitchen

Croy's passion for cooking began at an early age. As one of six children in a house where her mother wasn't a cook, she found herself playing around in the kitchen. "We really didn't want mom to cook," Croy laughs.

It was a far cry from the experiences she had on her aunt and uncle's farm in west-central Oklahoma. There, on the 440-acre grain farm, Croy watched as her aunt milled her own flour and churned butter from fresh cream. "They had cattle, chicken, geese, turkeys, a full orchard and garden," Croy recalls. "I stayed there a lot in the summer as a kid and got to see all of the processing and butchering. My aunt was a fantastic cook. I learned so much from her. They were subsistence farmers, so they did things very simply and there was never any waste. I really picked up a lot of my values about food from them."

About nine years ago, Croy decided to take the leap from the design world and follow her passion for cooking. Instead of heading to culinary school, she got a job at Breadsmith to get her feet wet. This led her to a pastry chef position at Overlook Farms, where she worked for two years before taking the executive pastry chef job at Gerard Craft's Pastaria. She has also launched a granola company, Banner Road Baking Company, named after the road where her family's farm is located: "I've loved granola since high school. I've been perfecting my recipe over the years and finally decided to put it out there and see what happens."

Croy credits this sort of trial and error with her success in the culinary field. That and tenacity. "I have an obsessive personality, so once I fixate on something, I go to town on it."

Croy took a break from making Pastaria's gelato to share her thoughts on the St. Louis dining food and beverage scene, her love for all things Sicilian, and her eighty year-old food crush.

What is one thing people don’t know about you that you wish they did?
I’m not a classically trained chef. I learned from my aunts and devouring cookbooks. Studying art and architecture in school forced me to think outside of the box and not rely on imitation. Cooking everyday is like athletic training for me. You’ve gotta keep building your knowledge base and chops to remain interesting and relevant.

What daily ritual is non-negotiable for you?
Good coffee and breakfast. I wake up ravenous and I like grains and something slightly sweet so I usually go for my granola.

If you could have any superpower, what would it be?
Teleportation, so I could travel great distances and not have to fly.

What is the most positive thing in food, wine or cocktails that you’ve noticed in St. Louis over the past year?
Chefs and patrons alike are starting to pay more attention to the quality of ingredients they use, where they come from and how they are grown.

Who is your St. Louis food crush?
Argh! Felt this one coming on. I admire the chefs that bang it out daily with focus and commitment — the ones in the trenches. Ashley Shelton, at Pastaria, is on fire right now. She has huge leadership capabilities and her desire is off the charts. She’s a joy to watch in action. I’m also waiting for my neighbor’s mother to fly in and make one of her legendary meals. She is 80-plus years old, from the island of Mauritius, and is one of the finest cooks I know.

Who’s the one person to watch right now in the St. Louis dining scene?
Justin McMillen at Sidney Street is putting up some beautiful plates and interesting combinations. He inspired me early on and continues to do so.

Which ingredient is most representative of your personality?
Dark chocolate. I’m intense, concentrated and direct. Sweet, but not fluffy. I have to be tempered properly to melt.

If you weren’t working in the restaurant business, what would you be doing?
Building Banner Road Baking Company at this point. I also want to write a cookbook or two and run the NYC marathon.

Name an ingredient never allowed in your kitchen.
Ha! My family could give you a long list. Margarine.

What is your after work hangout?
Home is where I recharge - In the backyard with my husband, kids, neighbors and dog.

What would be your last meal on earth?
Prune NYC. You can feel the love. Whole roasted rabbit, braised fennel w/ shad roe, brown sugar ice cream with balsamic drizzle, a Sicilian red from the Etna region.