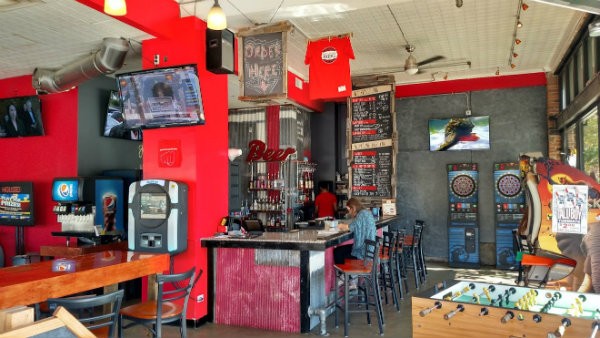 Bootleggin' BBQ (1933 Washington Blvd., 314-241-5999), the new Kansas City-style barbecue joint in downtown St. Louis, had been planning a grand opening celebration for early October when tragedy struck: The restaurant's general manager, 23-year-old Andrew "Drew" Carter, was murdered in south St. Louis. (Police say an arrest has been made, but charges have yet to be filed.)

Carter had only been with the restaurant for a few months, but he and co-owner/pit master Brenton Brown went back much longer. "I'd been friends with him for years from playing softball," Brown says. "It was a huge blow."

The grand opening celebration was pushed back two weeks in light of the tragedy, but will finally kick off today. Boulevard Brewing Co. takes over the taps all day, while tonight features live blues from 6:30 to 9:30 p.m. from Matt "The Rattlesnake" Lesch’s Snake Pit.

Tomorrow, the restaurant is serving up a whole hog, with the festivities getting underway by 4 p.m. and the meat ready to be served by 5 p.m. But that doesn't mean you have to come early — one thing that makes Bootleggin' BBQ stand out from the crowded barbecue pack is that it keeps late hours. The full kitchen is open til 10 p.m., with a limited menu all the way until closing time at 1 a.m.

"People might go to Pappy's for the barbecue, but here they can come, hang out, have a beer," Brown says.

Bootleggin' BBQ has been operating within the space in downtown St. Louis for just about a year now. But it's only recently that Brown and his crew have taken ownership. Previously, they were just a pop-up within the Pour House. Now Pour House has officially closed, and Brown & Co. have tailored the space more to their liking.

"We have a new bar, new decor, new tables and seating," Brown says. That includes some 12-foot-long "family-style" tables and eight taps instead of five. Going forward, Brown hopes to have many craft beer tap takeovers, as well as, eventually, a cocktail menu. After all, the name "bootleggin'" is a tribute to Tom Prendergast, the "bootlegging alderman" who kept Kansas City wet during Prohibition.

Prendergast is not the only person who's being honored at the restaurant. Andrew Carter remains on Brown's mind. "There are things he did for us that I'm only learning now," Brown says. "He was just on top of everything — he was such an asset to us."

Carter's softball jersey is being retired, and his No. 15 jersey will hang as a silent tribute on the restaurant's walls.