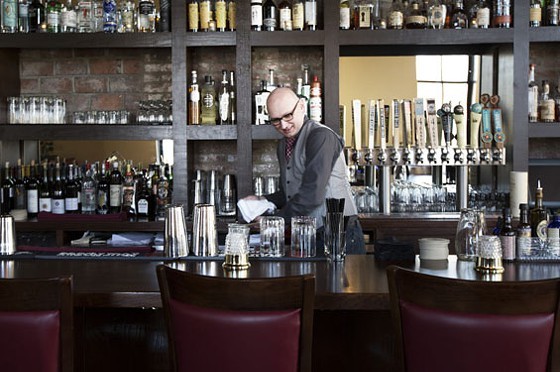 Has Ted Kilgore lost his mind? Did the spirit of a frat boy with a thirst for "jungle juice" descend into the body of the city's most acclaimed mixologist and inhabit his soul? Surely there is an explanation for the seemingly unthinkable: Kilgore is serving Everclear at Planter's House (1000 Mississippi Avenue; 314-696-2603).

Relax, cocktail enthusiasts, and let the man explain. "Everclear was created to be used medicinally and to be infused," Kilgore explains. "It's been abused over the years, but that's not how it was intended. It's actually a clean slate for making infusions."

See Also: Planter's House Owner Ted Kilgore on His Days as a Perfumer.

Kilgore has developed a line of Everclear-based seasonal infusions that are currently available at his Lafayette Square cocktail temple. "These are things that you can't go out and buy," he notes. "Making infusions allows you to use flavors in your cocktails that are typically hard to incorporate." For the fall, he has created a selection of these elixirs for use in his seasonally-inspired drinks, such as fig, butternut squash, sweet potato-maple and chai tea.

Kilgore's infusions are the cornerstone of his recent partnership with Everclear's Make It Your Own web resource. The site, which looks more like a subpage from Food & Wine than an ad campaign from a spirit synonymous with bad decisions, is a step toward recasting Everclear's image. Kilgore serves as its "head mixologist," and has curated an extensive library of recipes, pro tips and entertaining ideas for the at-home bartender.

Infusions, Kilgore believes, appeal to the current DIY zeitgeist, as well as to the consumer's desire for unique flavors. "And it's affordable," he adds. "From one bottle of Everclear you can get four 750 milliliters of an infused liqueur."

A far cry from the frat house indeed.

We are always hungry for tips and feedback. Please email the author at cheryl.baehr@riverfronttimes.com.