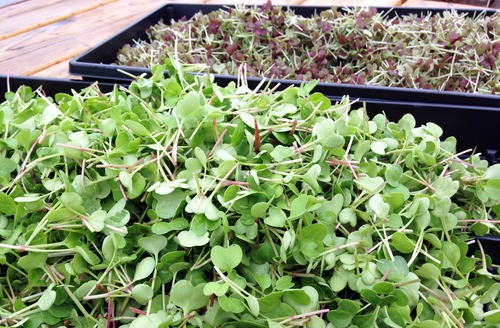 When it came to growing fresh food, downtown St. Louis used to be something of a desert. “There are over 200 community gardens in St. Louis, but not one is downtown, in the neighborhood that needs it the most,” Mary Ostafi, the founder of FOOD ROOF, explained in a TEDx GatewayArch presentation in 2014.


It took Ostafi's organization to change that. After meeting with other downtown dwellers to gauge interest, Ostafi, who was previously in interior architecture, realized quickly that there was overwhelming interest in “growing food where we live” and nurturing a healthy community.


At first, that took shape as a street-level urban oasis on Delmar Boulevard, just north the Washington Avenue strip. Beginning in 2011, a rough site of clay and buried construction debris was transformed into a fertile garden, as well as a community and family gathering place with a waiting list of residents eager to join.


After two years, the lease expired and Ostafi embarked on the next phase of the project – the city’s first rooftop urban farm as part of the greater local food system. The 10,000-square-foot space sits atop the self-storage facility Wave Storage, just a half block from the old site near the City Museum — only now it supports an all-organic farm, beehives and a chicken coop.

Sturdy farm tables provide a gathering hub for breaks from gardening and rest for tour groups, while a sink allows for produce washing and catering setup. A robust volunteer program offers workshops on the unique challenges and benefits of rooftop farming and organic gardening. Twenty community gardeners lease on a sliding scale ten plots that take up a quarter of the growing space.

The rest of the space provides produce for charity (80 percent) and local restaurants (20 percent).


McMurphy’s Café, a restaurant at St. Patrick's Center that trains and employs the homeless and mentally ill, features produce from the farm daily – much of it donated. That's just one way FOOD ROOF lives up to its mission: providing access to healthy food to everyone and serving as a model for urban rooftop agriculture.

The remainder of the rooftop harvest is sold to downtown restaurants (and delivered by bike!) for a hyper-local addition to their menus. In this, the first summer of the program, a total of 12 restaurants purchased produce – including such heavy hitters as the DeMun Oyster Bar, The Libertine and Tony’s. FOOD ROOF will also be supplying produce to A2, the new gluten-free restaurant downtown when it opens in November.

FOOD ROOF's primary crop is a unique “spicy” blend of microgreens – arugula, pea, radish, and a lettuce called Tokyo pekana. A large greenhouse, used for seedlings in the spring, houses the microgreens in the summer and through the winter.

He appreciates being able to walk the farm and hand-select fresh and gorgeous produce for weekly specials, such as salmon, pork belly, meatballs and a Kamayan-style dinner from the Philippines eaten with the hands. Past harvests include tomatillos, eggplant, red bell peppers, hot peppers, indigo rose tomatoes and a variety of microgreens, which top most Hiro dishes.


Next to sign up was Mango’s Chef Sergio Nakayoshi. After Ostafi dropped off a sample of microgreens one day, Nakayoshi was hooked. There was nothing else like it in St. Louis, he thought. “They are creating a whole new ecosystem on that roof,” he says.

Of Ostafi, he says, “She’s the first farmer I’ve worked closely with, and the fact that she’s an urban farmer is pretty cool. She has tons of knowledge of her produce and each time I visit, I learn so much about growing and harvesting.”

FOOD ROOF's eggplant is featured regularly in Mango's roasted scallop dish, served with a balsamic vinaigrette and orange juice reduction, while the radish, mustard and arugula microgreen mix is tossed with a cilantro vinaigrette and paired with the weekly seafood special. And red peppers, eggplant, tomatillos, scotch bonnet and hot peppers are in the regular menu rotation.

Nakayoshi says he's looking forward to the delicata squash and beets coming this Fall and flowers, herbs and a broader selection of crops next spring.

Check out the farm for yourself at the 1st Annual FOOD ROCKS Fundraiser on October 17. The event benefits the FOOD ROOF Farm with live music, great food and drinks.