Vitale's Deli (425 North Sappington Rd., Glendale; 314-966-9912) has only been open for a little over two weeks, but owner Mike Vitale already has a legion of regulars — most of whom greet him with a hug after they walk through the front door.

"I love it here," says Vitale of his Glendale neighborhood. "It's like I stepped back in time and am brought back my childhood on the Hill. There's a real sense of community here. There are families out walking and kids on their bikes who come in to grab sodas out of the cooler. We've only been open fifteen days, and it already feels great."

A Hill expat, Vitale moved to suburban Glendale about seven years ago. He and his wife had always wanted to open a classic Italian deli and had their eyes on their current storefront on North Sappington Road, across from the Glendale City Hall. When it came up for rent this year, the pair tossed around their idea with the neighbors. The sentiment was unanimous: Please open, and do it soon.

If the name Vitale sounds familiar, it should. Vitale is the son of Pete and Grace Vitale, founders of Vitale's Bakery on the Hill. His brother Pete continues the family legacy at the original location, which served as the jumping off point for Vitale's Deli — and provides its bread. "I just wanted to do a classic Italian deli," Vitale explains. "We use bread baked daily from the Hill, and high quality Boar's Head meets and cheeses. We get here at 6:30 a.m. and will stay until the bread runs out."

Vitale's Deli is tiny — there are no tables, making it an exclusively takeout operation. The only decorations are a baker's rack of bread, a soda case and a gelato cooler. Large windows make up the two front walls of the space, offering a view of tree-lined Glendale streets that could have been plucked from a Leave It to Beaver episode.

Vitale's offers nine different sandwiches, all named after members of his family — except for the "Glendale Club," a turkey sandwich topped with BLT salad, which is his homage to the neighborhood. "The Pete" Italian sandwich is his version of what he grew up eating on the Hill: ham, salami, roast beef, mozzarella, lettuce, tomato, onion, pickles and house-made Italian dressing.

Other signatures include "The Gracie," a mammoth cheese-covered meatball sandwich, "The Mikey" muffaletta and a caprese sandwich. Three entree-sized salads and classic potato or macaroni salad are also available.

The restaurant opens at 11 a.m. Monday through Friday and serves until they run out of bread, or 6 p.m. — whatever comes first. On Saturdays, business hours are from 10:30 a.m. until 3 p.m.

This does not mean that Vitale gets to sleep in, however.

"I get here at 6:30 every morning so I can start slicing the meat," he says. "It's hard work, but I'm having fun. I'm lucky. I get to be happy coming to work every morning."

Look below for more photos of Vitale's Deli. 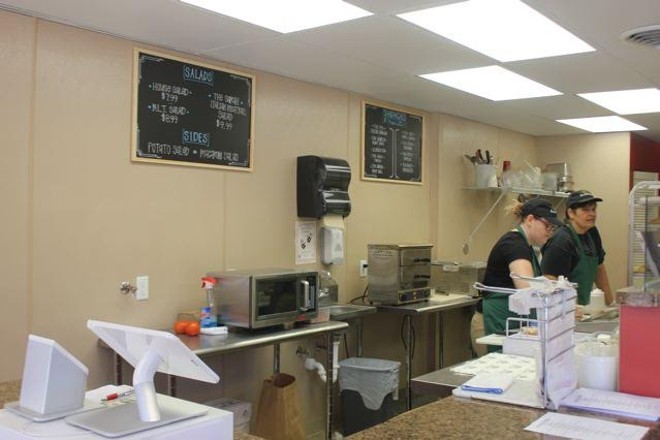 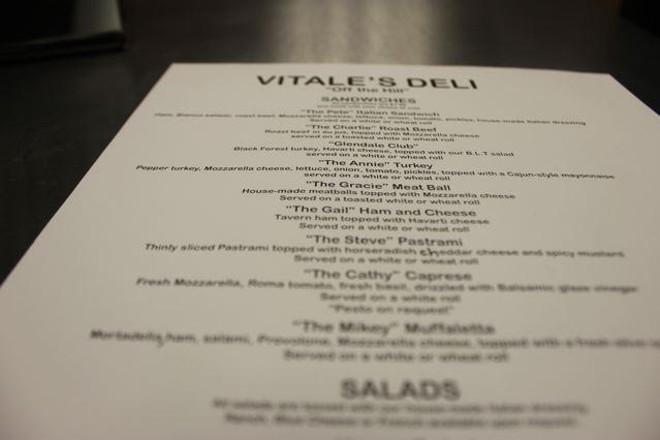 We are always hungry for tips and feedback. Email the author at cheryl.baehv@riverfronttimes.com.