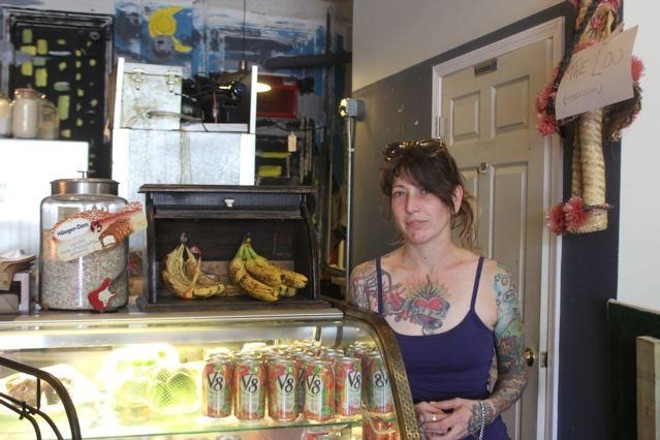 Around 4:50 p.m. on September 18, Nicole McCormack walked into the Shaw neighborhood coffee shop she owns, Restituo (4100 Shenandoah Avenue), to do a little prep work. She turned on the lights, used the restroom and was washing her hands when she heard an odd noise coming from the basement.

"I walked downstairs and saw water everywhere," McCormack recalls. "There was about a seven foot arc of water that had blown through the wall and was coming into the basement. It was unbelievable."

McCormack bolted upstairs and into the street where she saw the source of the problem. A water main had broken underneath Thurman Avenue, and the force was so great that it had burst through the street, blowing open the sidewalk in front of her cafe. The water was spilling into her basement through an underground hole caused by the force of the eruption.

"I just started screaming for someone to help me," recounts McCormack. "Then I ran back downstairs to see if there was any way I could stop the water. At this point, it was getting so deep that 50-pound bags of clay and my heavy pottery equipment were starting to float. It was rushing all around me so I could barely walk. That's when I saw the water rising up to the electrical box. I threw the power and managed to get back upstairs. When I told the guy from Laclede Gas what happened, he said he was surprised I wasn't electrocuted."

It took the City of St. Louis nearly an hour to stop the flow of water into the street and McCormack's basement. All told, four feet of water had flooded her basement, destroying tens of thousands of dollars of goods and equipment. "I had to fill two dumpsters full of dry goods and supplies," McCormack laments.

The situation has become a nightmare for coffee shop, which isn't even two years old yet (and, coincidentally, was just chosen as the best in the city by the RFT). It wasn't just goods for Restituo that were lost in the flood. McCormack is also a potter and musician, and all of her equipment was in the basement: kilns, clay, tools, instruments, amplifiers. To make matters worse, McCormack was also in the process of moving into the apartment upstairs from the coffee shop, and she was storing nearly all of her personal effects in the basement. "I lost almost everything I own."

McCormack has renter's insurance, and even flood coverage. However, a clause in her policy states that she is not covered for damages that occur as a result of a situation off her premises. And though she does not feel comfortable disclosing her dealings with the City of St. Louis, suffice it to say that she is not going to be compensated for her losses.

Restituo was closed for two weeks so that McCormack could call in a salvage team to deep-clean the cafe and basement. "That alone cost $10,000," she says. "It was like opening a new business again. I was here every day from 7 a.m. until midnight cleaning and trying to get everything back in order. I had just redone my floors two weeks before, and I had to redo them all over again."

McCormack plans to keep Restituo open, though she acknowledges it will be difficult due to the enormous financial burden she now bears. Though she hasn't done so yet, she is planning on launching a Go Fund Me campaign to help her offset some of the costs.

"I hate asking for help," McCormack says, "but I don't think I have a choice."


We are always hungry for tips and feedback. Please email the author at cheryl.baehr@riverfronttimes.com