I Scream Cakes Banks on Booze to Stay Afloat 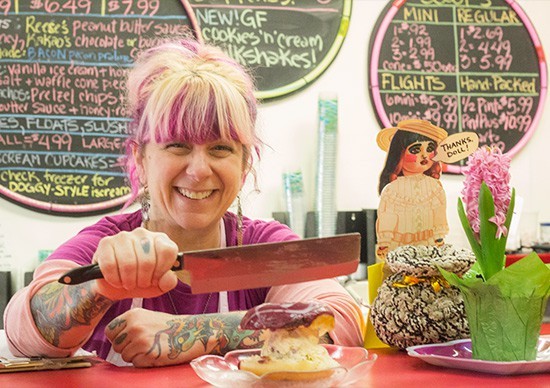 Owner Kerry Soraci does not parse words when speaking about the state of I Scream Cakes. "We're broke. I know that probably sounds like a bad thing for a business owner to admit, but it's the truth. We are flat broke."

Soraci opened I Scream Cakes four years ago on Cherokee Street. The shop has since earned a reputation as one of the most whimsical dessert spots in town. Yet this year, she could no longer deny that it was simply not enough to sustain her business. "It's hard owning a business," Soraci explains. "It's especially hard in an up-and-coming neighborhood. I love it here — the people, the businesses, the community — but it's hard. We aren't exactly in the most affluent neighborhood, and ice cream isn't cheap."

Faced with a $20,00 price tag for a new ice cream maker, Soraci knew that she had to do something to grow the business. That's when she came up with the idea to start making boozy concoctions. "Who doesn't like booze?" she asks. "Who doesn't like ice cream with booze? Sure, one of the reasons I decided to do this was survival, but I have a genuine interest and excitement about it."

She's not the only St. Louis ice cream parlor selling boozy ice cream. Ices Plain & Fancy, based in Shaw, added a boozy element earlier this year, and Clementine's Naughty & Nice Creamery made its name — or, at least, the naughty part of its name — with its liquor-infused concoctions.

But even with those trailblazers to follow, the path was tough. A liquor license isn't cheap, and coupled with the cost of new equipment, Soraci simply couldn't afford the investment on her own. That's when she decided to ask for help. Five months ago, she launched a campaign called "Help Us Get Over Our 4 Year Hump" to raise money for the business. In June, she reached 100 percent of her goal, though she had to put in a significant amount of her own money to do so.

"I actually think that says something to people," muses Soraci. "It shows that we are actually investing in ourselves — not just asking others to do it for us."

Soraci sees her investment in I Scream Cakes as being more about just her business. "I could probably make a lot more money somewhere else — say, Maplewood — but I have put too much money into this space. Painting, decorating it — it sounds superficial, but I just don't have the energy to do that all over again," Soraci explains. "Besides, when I look at who has come out to fund our campaign, it's Cherokee Street people. They are invested in the shop. I really love the sense of neighborhood. I don't want to leave that."

Soraci has a hearing for her liquor license scheduled in the next few weeks. It has been an onerous process. "They make us feel like we are the bad guys," she says of City Hall. "I feel like I am being punished — like I have to write 'I will not chew gum in school" a hundred times on the blackboard." Once she makes it past the hearing, she hopes to begin serving her boozy ice creams as soon as possible — hopefully by the holidays. She even has a new tagline for the concept: "When the kid in you needs a drink."

In the meantime, Soraci keeps moving forward, hoping that the next phase in her business plan will really turn things around for the beloved parlor. "Yes, I want to make money, and somedays I lose it because we have only made thirty dollars. But I still have hope that we will thrive."

We welcome tips and feedback. Email the author at cheryl.baehr@riverfronttimes.com.