Colleen Clawson, Rachel Moeller, and Amanda Geimer are three women with a love of food and their city, and an exciting new concept for the up-and-coming McKinley Heights neighborhood in south St. Louis — Milque Toast Bar (2212 South Jefferson St., 314-833-0085).


Clawson lives in the neighborhood behind the building that is now the Milque Toast Bar, and she had been eyeing the space for some time. The small corner space had potential; the large yard full of eight-foot weeds, however, left something to be desired.

But it was in that jungle of a yard that the idea of a toast and milk bar came to her. “What we need is a goat!” she’d exclaimed to her future business partners. And then, “Hey, we should serve goat’s milk!” From that in-the-moment stream of consciousness thought came the idea of a milk bar. And what goes great with milk? Toast! 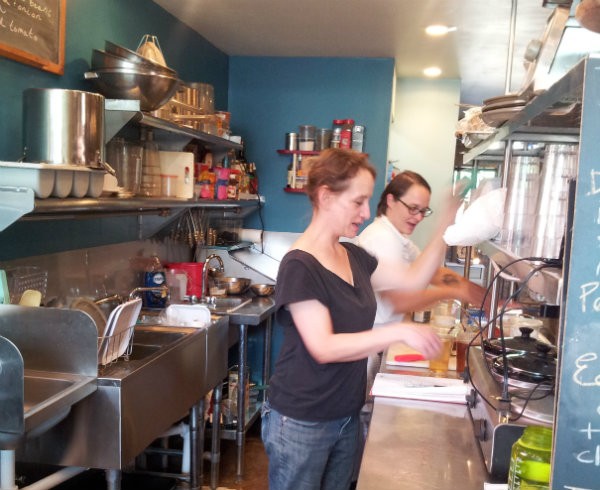 The toast served at Milque Toast Bar is not for the carb-averse. These are thick slabs of toasted bread slathered with butters, jams, jellies, and cheeses, and often require a fork and knife — or at least a generous supply of napkins. In particular, the Toast Jezebel, a substantial slice of English muffin bread, is covered in a layer of rich cream cheese, followed by chunky, orange ginger marmalade and sprinkled with fresh chives. The dish is served with several thin slices of crisp apple sprinkled with black sea salt. 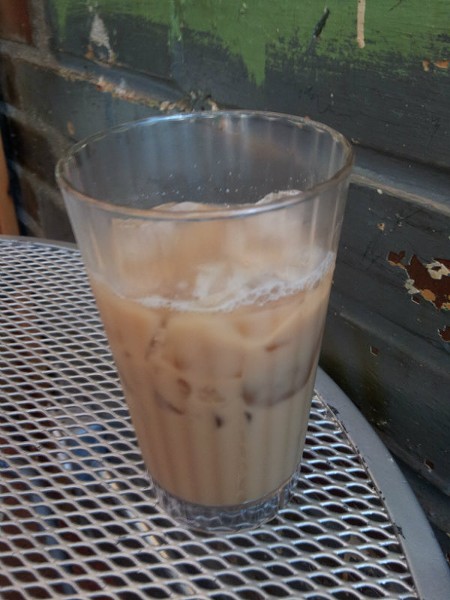 But even if sweet isn’t your thing, you won’t run out of toasty options. Savory toast selections include the Apple Cheddar Melt, which couples Marcoot Jersey Creamery white cheddar with Amish apple butter & Fuji apples, as well as the classic Pizza Toast.

The Milque Toast Bar creators are especially proud of the Salad Days toast, a special item on the menu that incorporates fresh vegetables from the McKinley Heights community garden, and will eventually include produce from Milque Toast Bar’s own garden. The Salad Days vegetable selection changes regularly and the price is a “pay-it-forward” system, where customers are asked to pay what they can (or a little more) to enable a future customer to eat his or her Salad Days meal for free.

Nearly every item on the menu involves bread or toast in some way. It’s a key ingredient in the Fancy Stuffin’ as well as the signature MilqueToast, a warm, crockpot bread pudding. And while the crockpot soup of the day is toast-free, you can still add croutons.

Of course, the “milk” part of the Milque Toast concept is just as intriguing. While whole cow’s milk is the first option on the menu, Milque Toast Bar also offers cashew, coconut, oat, and rice milk. True to Clawson’s original vision, the owners hope to occasionally offer goat’s milk. For non-milk drinkers, Mississippi Mud coffee, the hibiscus-flavored agua de jamaica and an assortment of tea bags are also available.


The great American food writer Mary Kennedy Frances Fisher definited milktoast as “a warm, mild, soothing thing, full of innocent strength.” The Milque Toast Bar features this quotation on its website, menus, and business cards, and this idea is embodied not just in the food, but also the atmosphere of the restaurant, and its proprietors’ attitude toward their surrounding neighborhood.

The space is small, but cozy — soothing; the walls are exposed brick with the occasional splatter of green paint. The windows are open, letting in the autumn breeze and the sounds of the light traffic outside, and every window sill and ledge is bedecked with antique glass bottles, kitchen wares, and old toys. Even the refrigerator and bread boxes used in the kitchen look like they could have come from a grandmother’s kitchen. When a patron comments on the decor and the atmosphere, Clawson quips, “It’s a reflection of our intent.”

The women of the Milque Toast Bar are looking forward to their first full growing season, so that they can use their garden to its fullest and incorporate their own homegrown vegetables into their dishes, co-owner Rachel Moeller says. Eventually, they are also hoping to host special events and fundraisers and engage with the surrounding community even more. Moeller says they’ve been overjoyed by the “positive reaction from our customers, and everyone really liking everything.”

Clawson adds, “People are already coming back for more because they liked something so much they have to try it again!”

We welcome tips and feedback. Email the writer at katie.ineich@gmail.com