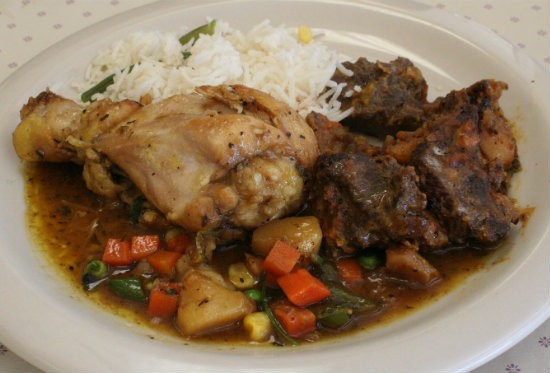 University City's Jeffrey Plaza has a little bit of everything: a Japanese sushi bar, a Vietnamese bistro, a Jamaican restaurant and even a Korean grocery. But the shopping center's newest tenant, which opened in the space formerly occupied by Famous Szechuan Pavilion, might be the most diverse of all – in and of itself a virtual United Nations.

Although its owners are from Uganda, Olive Green International Cuisine (8615 Olive Boulevard, 314-942-8730) is best described as, well, international. Owner Christine Sseremba and her two sons came to St. Louis about four years ago.

An actress, Sseremba previously opened both a restaurant and an IT training center in her native land. “When you’re born in Africa,” Sseremba says, “you have to be very enterprising.”

Upon receipt of her work visa, Sseremba struggled to find a job in the tight St. Louis jobs market. Her eldest son, George, continued to return to the idea of opening a restaurant to share her unique flavors and style with the city. Sseremba knew the restaurant business would mean long hours and a lot of hard work, but she’s not afraid of either.

She credits influences from India, Europe and the Middle East in addition to Uganda. Three specialties, highlighted on the front of the menu, are a tilapia plate with plantain and potatoes ($8.99), chicken wings (six for $8.99 with two sides) and a T-bone steak dinner ($12.99).

Samosas seemed like the natural choice for an appetizer, but were unavailable on our visit. Instead, we tried the "Chapati Egg Cheese Wrap" – a savory, fried flatbread filled with eggs, peppers and a unique blend of spice. It was delicious.

A somewhat limited buffet ($12.99) is offered for lunch, but the dinner menu is quite lengthy. A variety of beef, chicken, fish, goat, lamb and vegetarian dishes are available — many of which are not often seen on St. Louis menus. The smoked chicken stewed in banana leaves sounds interesting ($12.99), and the Beef Hoof soup ($12.99) makes Ox Tail soup (also on the menu for $10.99) sound rather unadventurous. For a small crowd, the Goat Roast might be fun, as a whole roasted goat leg serves four to six people ($49.99). 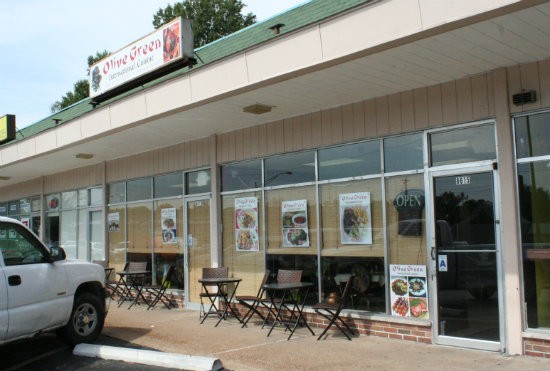 After opening two months ago, Olive Green International Cuisine is still figuring out the daily rhythms and practices of business. The restaurant opens at 11 a.m., but upon our arrival at 11:30, the lunch buffet was empty. It was well after noon before dishes started to slowly roll out of the kitchen, and even then, they were fairly limited for a buffet – two types of rice, potatoes, a goat dish and chicken with vegetables. The chicken dish was the standout: The vegetables were deliciously seasoned.

You could be annoyed by the slow start, or you could see it as a sign of authenticity – after all, a more relaxed view of time is the norm in most non-Western cultures around the globe. Right there in the most diverse strip mall in the city, Olive Green International Cuisine is keeping it real.