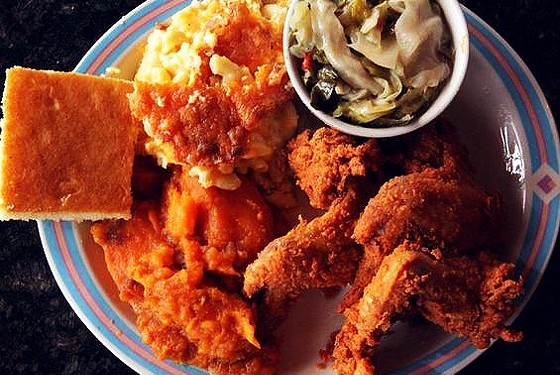 The fascinating story behind St. Louis' most beloved soul food restaurant — and, more recently, star of its own reality TV show, Welcome to Sweetie Pie's — is being told in a new book, The People's Place: Soul Food Retaurants and Reminiscences from the Civil Rights Era to Today.

The chapter about Sweetie Pie's tells owner Robbie "Miss Robbie" Montgomery's fascinating tale — from growing up in the notorious Pruitt-Igoe projects to working as a background singer with Ike and Tina Turner to working as a dialysis technician at Jewish Hospital (now Barnes-Jewish).

Interestingly, Montgomery says running her own restaurant gave her new appreciation for Ike Turner. "Back then we all thought he was mean," she tells Hoekstra. "You had to rehearse. He had his rules. You couldn't have runs in your stockings. But now that I am running a business I know exactly where he was coming from."

Before Turner died, she adds, he visited Sweetie Pie's. "As a matter of fact I still have the same fifty-dollar bill he tipped me," Montgomery says. Tina Turner, however, has yet to visit.

The 224-page book, out October 1 from Chicago Review Press, tells the story of 20 iconic restaurants, from Sylvia's in Harlem to Mother's Restaurant in New Orleans. Each restaurant also contributes a recipe.

In the case of Sweetie Pie's, the recipe is an obvious one: the restaurant's mac and cheese, writes author Dave Hoekstra, is the best in the Midwest. Thanks to its inclusion here, we also know its secret — a full pound of Velveeta. There's also a half-pound each of colby, Monterey Jack and sharp cheddar, plus a cup of American or mild cheddar. Damn.

Check out its Amazon page for more about the book.