Chef Chat: How Christian Ethridge Got His Act Together at Taco Circus 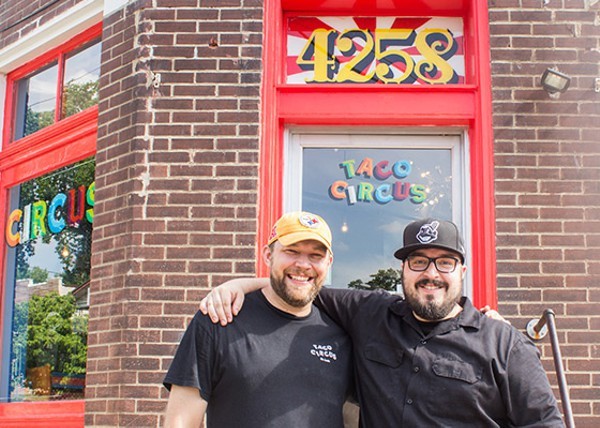 Christian Ethridge admits that Taco Circus (4258 Schiller Place, 314-808-2050) was inspired by necessity. "My wife's father had a fuel pump manufacturing plant in Houston," Ethridge explains. "I was working in the plant, using a push-broom to sweep the two football fields' length building. It took me four hours to get from one end to the other. And just as I was finished, I had to start over again. That's how I spent my days. I just couldn't take it."

Ethridge's father-in-law saw his potential, however, and was priming him to take on a lucrative sales role with the company, but the young, hard-partying Ethridge blew it. "Yeah, I messed up. I lost the opportunity," is all he will say, but the episode served as a wake-up call. "My wife — she was pregnant with my son at the time — was in St. Louis for film school at Webster University," he explains. "I realized that I really needed to be up here with my family.

The Austin native promptly moved to St. Louis and took his first kitchen job as a dishwasher at a lentil company. Seeing a future in the restaurant business, he went to culinary school and began cooking at restaurants around town before moving back to Austin after his wife graduated from Webster.

The food scene was booming in his hometown, and he had no difficulty landing a job. He quickly realized, however, that if he wanted to open his own business, he couldn't do it in a place that was expensive and oversaturated.

Ethridge recalled his time in St. Louis fondly — the ascendent restaurant scene, the low cost of living — and realized that it was the perfect city to open a place of his own. He recruited his longtime friend, Mikey Carrasco, to join him in opening Taco Circus, a homage to the taco counters they grew up on in Texas. "We asked ourselves, 'Do we really want to do this, knowing how hard it is?'" Ethridge recalls. "We also asked what it is that we could contribute. Did we really have a concept? Ultimately, we erred on the side of what we knew best."

Ethridge took a break from making the from-scratch sausage used for Taco Circus' signature breakfast tacos (he only uses humanely-raised heritage pork) to share his thoughts on the St. Louis restaurant scene, his karaoke jam, and why you shouldn't say anything indiscreet at his restaurant.

What is one thing people don’t know about you that you wish they did?
I like to listen to people thoroughly and guess how crazy they are.

What daily ritual is non-negotiable for you?
Loud music on my morning commutes.

If you could have any superpower, what would it be?
Algorithm Man. I see the whole universe in a seamless flow of mathematical terms. I save the day (or “solve the day”, is it were) with equations, my headquarters is a big Rubik's Cube shaped castle, my arch nemesis is The Creationist, my kryptonite is — wait for it — pi.

What is the most positive thing in food, wine or cocktails that you’ve noticed in St. Louis over the past year?
The increased amount of canning and bottling in the local craft beer industry.

Who is your St. Louis food crush?
The owner of Global Foods Market in Kirkwood. Man, it's just a great store. Plus he looks like he is 30 years old, but I am gonna bet is 130 years old. It's as if he found Shangri-La. But yeah, they have the best price on packaged smoked fish.

Who’s the one person to watch right now in the St. Louis dining scene?
I used to watch KT Ayers [the Purple Martin, Lucha] cooking when I was a dishwasher 10 years ago. I would like to see her run a big show of her own.

Which ingredient is most representative of your personality?
Pomegranate — everybody in my ear telling me a better way to get the seeds.

If you weren’t working in the restaurant business, what would you be doing?
Something as equally low-paying, thankless and noble. Social worker? Elementary school teacher? Hand-stuffing teddy bears in a large, nondescript warehouse?

Name an ingredient never allowed in your kitchen.
Canned chipotle peppers in adobo sauce. Also, give the feta cheese a rest, people.

What is your after work hangout?
Catch me at your local karaoke butchering Hank Williams Sr. or "99 Red Balloons" (the German version).

What’s your food or beverage guilty pleasure?
Liquid codeine mixed with Sprite, stirred over ice in a double stacked styrofoam cup. Garnish with a Jolly Rancher.

What would be your last meal on earth?
Chicken-fried venison, smoked dove breast, pan gravy, mashed potatoes, corn off the cob, broccoli steamed al dente, leaf lettuce salad with shaved carrots, tomato, black olive, raw mushroom. Matter of fact, since we are on the topic, have them serve this at my funeral, too.