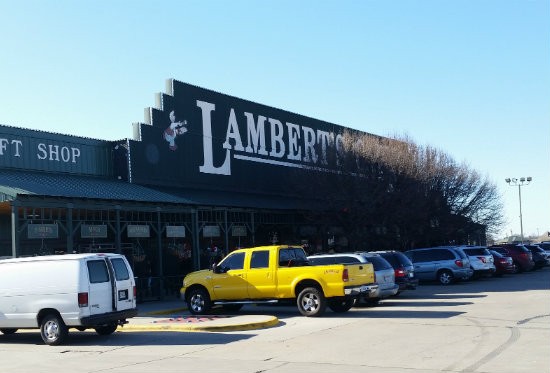 The suit was filed yesterday against the Sikeston restaurant by University City-based attorney William Meehan on behalf of a guy gal named Troy Tucker. Tucker claims she "sustained a lacerated cornea with a vitreous detachment and all head, neck, eyes and vision were severely damaged" after being hit by a roll during a September 2014 visit. [See editor's note at the bottom of this post.]

The practice of throwing rolls is deemed a "defective condition" of Lambert's, and the suit claims that the restaurant knew (or should have known) about the danger of this practice.

Tucker now seeks an award of at least $25,000 to pay for her medical bills and legal fees. The restaurant's "carelessness and negligence" has already caused expenses totaling $10,000, the suit alleges, and who knows what future medical costs may emerge from the assault of the freshly baked bread.

But we have to wonder how much of a case Tucker has. After all, in June, the Kansas City Royals and their mascot were deemed not to have been at fault after a thrown hot dog hit a man in the face and tore his retina. In that case the "baseball rule" was referenced, and the jury found that the man assumed some responsibility for personal awareness by entering a baseball stadium.

Might the "throwed roll rule" become established legal precedent? After all, "Home of Throwed Rolls" is plastered on massive billboards all over the state. Shouldn't diners at Lambert's be responsible for some level of situational awareness when entering the restaurant?

And if not, does that mean the end to throwed rolls in Missouri? What kind of country are we living in when a restaurant can't toss a freshly baked dinner roll at a man's head?

Editor's note: Our story was picked up by Fox-4 in Kansas City. After talking to the plaintiff's lawyer, however, the television station reports that Troy Tucker is actually a woman. We have changed our story accordingly.

We welcome tips and feedback. Email the writer at johnnyfugitt@gmail.com.