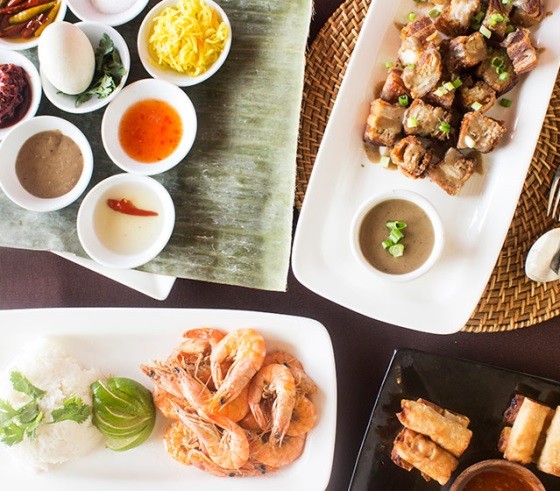 Were it Saturday night, I would have thought I had wandered into a Filipino wedding reception. But this was Sunday morning, so there was only one other explanation: I was at Kamayan's weekly brunch, a treasure hiding in plain sight that, once word gets out, will surely be one of the hottest dining experiences in town.

I say "experience" because Kamayan isn't a restaurant in the traditional sense -- it's a pop-up in Mandarin House's cavernous banquet facility on Olive Boulevard, in the heart of University City's Chinatown. It started this past March as nothing more than a group of expat friends who wanted to get together on Sundays to cook -- though it's since morphed into a weekly, open-to-the-public affair.

There's no owner, per se, though Ruby Pradas serves as its matriarch. Every week, she oversees the group of friends and family as they gather together to prepare the massive feast. All of them work day jobs and weren't necessarily looking to open a restaurant. They simply craved the social interaction that comes from cooking together and wanted to share their culinary heritage with their adopted community.

In addition to Sunday brunch, Kamayan now opens on Thursday evenings for à la carte service, live music and karaoke. I visited last Thursday and witnessed possibly the most diverse crowd I've seen assembled under one roof in this town, a few of whom were tearing up the dance floor with some serious ballroom moves as a cover band played Michael Jackson. Forget the food -- this alone is worth a visit.

But how could you forget the food after being treated to such an array of authentic Filipino fare? There is no way to experience Kamayan's feast in its entirety on one visit -- two, even, is pushing it. The buffet is an overwhelming assortment of roughly 30 different dishes, most of which involve pork in one form or another. Fortunately, you're asked upon arrival if it's your first visit. If the answer is yes, a worker will give you a full tour of the buffet.

Unlike the à la carte menu, which tries its hand at some forgettable fried chicken and hot wings, there is no filler on this spread -- every last item is an authentic, made-from-scratch dish. It's as though the folks at Kamayan opened up a Filipino cookbook and challenged themselves to cook every single dish.

In a similar spirit, I tried to sample everything. I think I made it through, though I don't recommend doing things this way. By the end I was so glazed over I could barely discern the pork on my plate from the pickled papaya. Heed my warning: Take a few leisurely trips and then dive deep into the highlights rather than trying to do it all. 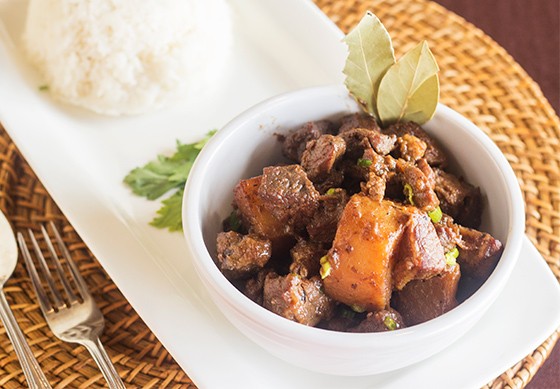 One such dish is the sinigang, a piquant, sour pork and turnip soup made with tamarind; it's the Filipino equivalent of grandma's chicken and vegetable soup. Pancit bihon is a must-try if you're new to Filipino cuisine. The micro-thin rice noodles (calling them "angel hair" would suggest more thickness than is accurate) are infused with caramelized garlic and onions, then tossed with vegetables and shredded pork. These noodles, as well as the garlic sautéed rice, make excellent bases for some of the other, more stewlike dishes.

The Philippines' most famous dish, adobo, is a slow-simmered vinegar and soy-based pork stew. The meat drippings infuse the sauce, forming a rich, slightly sour tasting gravy -- perfect for soaking up the accompanying fork-tender potatoes and carrots. It's like a Pacific Island-style pot roast. The menudo (not to be confused with the Mexican tripe soup) is another way to enjoy slow-stewed pork, though this time it's paired with a rich, tomato and chickpea sauce, giving almost a North African feel. 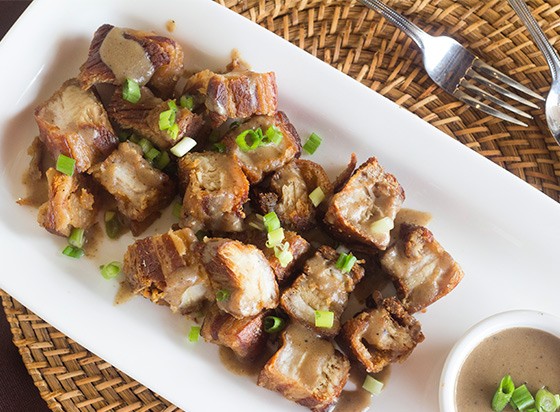 Oxtails, braised with peanuts, curry, eggplant and bok choy, are rich in mouthfeel, though the dish lacks much flavor on its own. It is meant to be paired with a generous dollop the accompanying spicy salted shrimp and chile paste. It combines with the peanuts and curry to form a warm, earthy flavor.

By this point, I was overwhelmed with pork stews, but I allowed myself to be tempted by the bicol express. This was fortunate, as it ended up being my favorite dish -- a fiery hot concoction of pork, papayas, coconut milk and fish sauce. It was the most complex combination of flavors I tried at Kamayan. To cool my mouth, I eschewed water for a few hunks of the roasted whole pig. It's a Filipino tradition: succulent meat, crispy skin, perfection.

It also gave me strength for the pièce de résistance. When our server gave us a tour of the buffet, she cautiously pointed out the dinuguan, telling me, "You don't have to try it unless you are brave." A fair warning, because "dinuguan" turns out to be pork-blood stew.

Committed to my craft, I gently ladled the velvety, chocolate-colored stew from its bubbling cast-iron cauldron over two rice and coconut flour pastries for the wildest version of biscuits and gravy I will every try in my life. In theory, it isn't for the squeamish, though once I got past the idea of the dish, I found the stew itself to be mild and slightly sweet, akin to mole.

I grabbed a piece of what my Filipino friends lovingly refer to as "stinky fish" -- salted, dried whole whitefish -- before heading to the lavish dessert buffet. Fried, jackfruit-stuffed plantains; rice cakes flecked with corn; and a lychee flan that tasted like a hunk of caramel were all excellent, though I recommend saving room for the shaved ice. Guests are encouraged to top it with every last topping that's offered -- jackfruit, coconut milk, toasted coconut, tapioca, yam ice cream. I let the attendant simply pile everything on and reveled in the cornucopia of flavors and textures.

Which pretty much sums up my experience at Kamayan. I just kept piling things on my plate, one after another, until I couldn't really discern what was happening -- though I knew I was enjoying myself. That, I've come to learn, is the mark of a good Filipino party.