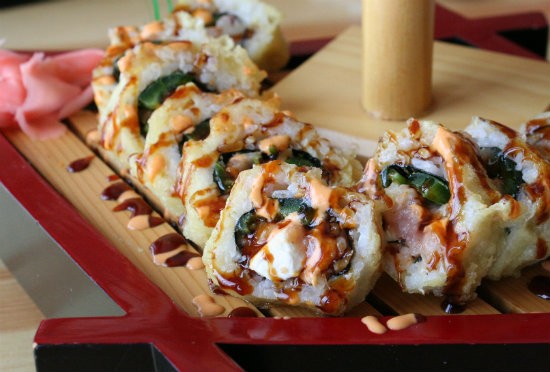 In one episode of Netflix's Chef's Table, chef Niki Nakayama is profiled for her much-celebrated LA restaurant, n/naka. Although her previous sushi restaurant was a commercial success, Nakayama felt boxed in by the limited expectations of a sushi restaurant. Burned out, she quit. Her passion for the kitchen didn't return until she took some creative liberties at n/naka.

Although their styles are very different, Kang and Hana Na might just be St. Louis' version of Nakayama. The couple owned and operated the successful Sapporo sushi restaurant in Ballwin before selling it two years ago. Both Kang and Hana are Korean, so rather than open another strictly sushi restaurant, they returned to their roots and added their favorite Korean dishes next to the Japanese offerings at Sapporo 2 (3043 Olive Street; 314-899-0698).

The nigiri, sashimi and roll options are extensive, but mostly straightforward. One exception to this is the "Amigo's Roll," which you are not likely to find anywhere else. This isn't a roll for the traditionalist who turns up the nose at American bastardizations like a Philly roll. Spicy yellowtail is paired with cream cheese, jalapeno and cilantro, then given a dip in the deep fryer.

Sapporo 2 recommends the chopchae as an under-the-radar dish that people might miss, so we had to try it. By nature, the sweet-potato noodles are a bit tougher, but the colorful variety of crispy vegetables such as carrots, peppers, broccoli, cabbage, onion and mushrooms make for an enjoyable dish. The chopchae has a very personal touch as well: The Perilla Lilies framing the plate are grown by the Nas in their back yard.

In addition to their different food offerings, Sapporo 2 has an antithetical atmosphere to most sushi restaurants in the city. Established sushi restaurants such as Drunken Fish in the Central West End or Cafe Mochi on South Grand effuse a hip, modern vibe. Sapporo 2 goes the opposite direction with traditional art and conservative finishes.

The grand opening has not yet been announced, but Sapporo 2 is open for business. A menu is being constructed for a sushi happy hour which will include specials on appetizers, drinks and food from 4:30 to 7 p.m.