We Tried: "The Hunter" omelet with bacon, ham, sausage and avocado as a breakfast burrito ($10); "Cool Cucumber" juice. 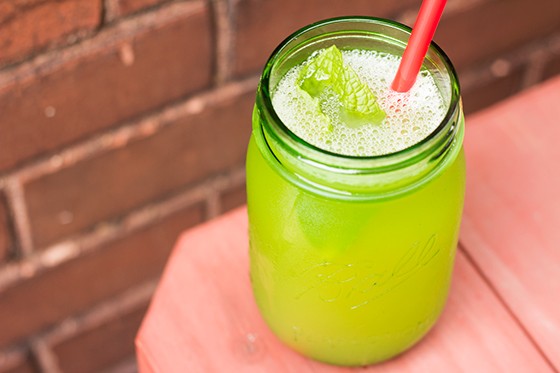 Athlete Eats -- the south city restaurant known for gluten-free gourmet health food developed by Cardinals' nutritionists Simon and Angelica Lusky -- opened in 2014 on Cherokee Street but has since undergone an exciting new set of changes. As reported by Riverfront Times last fall, the husband-and-wife team planned for a series of expansions and ultimately took on a rebrand as well.

In May, Athlete Eats became Revel Kitchen and launched a food truck to get its new name out. Additionally, renovations for a second location in Brentwood are well underway, with tentative plans to open by fall. Meanwhile, patrons can get a taste of what the new storefront will offer each day of the week by visiting its flagship, where new lunch and brunch menus have rolled out for the summer.

"We're really focusing on giving the customer more creativity, if you will," says owner Simon Lusky. "We're giving people an option to get a couple different takes on an item."

For the weekend-only brunch menu, for instance, this means more takes on the omelet, including a couple new ingredient combinations and the ability to turn any of them into breakfast burritos wrapped up in teff tortillas. The "Cherokee Street" with Soyrizo, goat cheese, black beans and avocado carries over, with new alternatives including "the Gatherer" with kale, mushroom, onions, peppers, tomatoes and cheddar. From the lunch menu, personalize dishes like the fan-favorite Caulichalada with chicken, pork, mofu or tri-tip steak.

Housemade waffle and pancake batter can now get cooked up in three different options: "Plain Jane" with a side of grassfed butter and Missouri maple syrup; "Waino Style" with housemade peanut butter, strawberry jam and vanilla greek yogurt; and "Wodwich" with bacon, sausage, ham, egg and avocado.

New drinks are also available, including more local coffee options, a monthly special smoothie and a new service model for cold-pressed juices utilizing a top-of-the-model juicer and nitrogen taps. Check out new flavors including "Summer Sunshine" with carrots, orange, golden beets and turmeric as well as "Cold Cucumber" with cucumber, pineapple and mint.