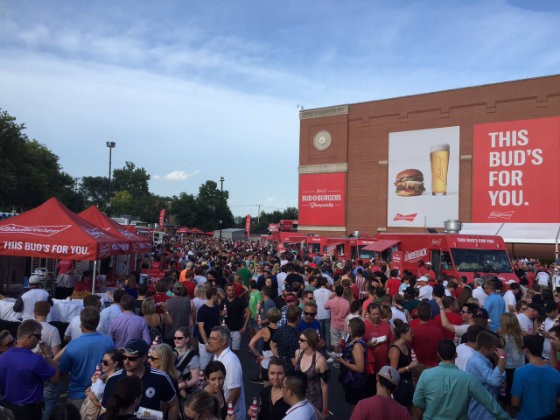 Held in the brewery's Soulard parking lot, the event was a competition to find the nation's best amateur burger chef. Attendees bought tickets for $20 to $25 each and received tokens good for four Budweiser beers and ten burger samples (each sample was one-fourth of a regular burger).

But while Bud was easy to come by, with bartenders handing out bottles of beer as fast as people wanted them, the burger line grew to snake across the entire parking lot. Worst of all, it didn't seem to be moving.

Some people just gave up (Howards in Soulard, the closest bar and grill, did a brisk business from people wearing Bud & Burgers wristbands). Others tweeted angrily at Budweiser, expressing unhappiness at the lack of burgers available.

Several attendees told Riverfront Times that they waited in lines for more than 30 minutes and only got to try one or two burgers.

And, at the event, we observed metal fences being put up around the burger truck area. No one was let in after 7:30 p.m, even though the ticket info had said that burgers would be served until 8 p.m.

By that point, some people had been waiting for quite some time -- and they were understandably displeased.

So disappointed in @Budweiser and how the event was ran today. Got a quarter of a burger out of possible 10.

The brewery replied to each unhappy tweet with the exact same message; "Thx for coming to our 1st #BudandBurgers. Sorry you didn't get to sample burgers. Check http://budweiser.com tmrw for refund."

By "tmrw," Budweiser was referring to Sunday, July 12. By mid-morning on Monday, July 13, the website still had no refund instructions listed anywhere.

Mid-afternoon Monday, Budweiser did reply to one attendee who asked about the refund.

@GrotaciousD We ran out sooner than expected at #BudandBurgers. To make this right, visit http://t.co/lwngsVeXfQ later today for refund info

It wasn't just hunger that had some people complaining. Several contestants in the competition told Fox 2 that the text-based voting was rigged. Since many attendees weren't able to try all 10 burgers, the competition was biased towards local competitors who already had name recognition, they alleged.

Fox 2 reported that the $100,000 winner, Angie, who served something called an "Angie Burger," are from St. Louis.

Contestant Brian Furey told Fox 2 that, "[Budweiser] had no idea what they were doing. They were asking me if I give them bacon while we were already competing, if I would cook bacon for other contestants 'cause they were trying to find bacon. There wasn't enough ingredients, they didn't order properly for it."

Scott Wallace, another contestant, told Fox 2 that contestants were told to cook burgers for 1,000 people, when in reality, 5,000 people showed up. 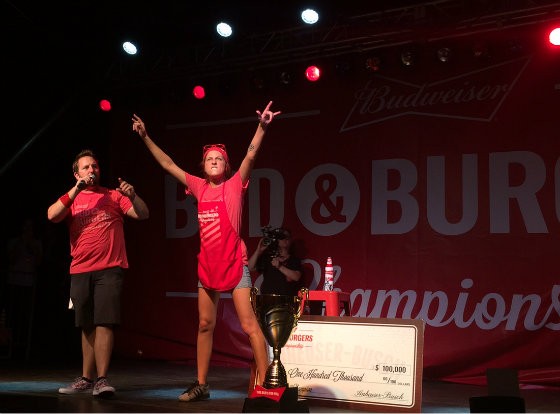 A-B gave Fox 2 a comment saying, "We are sorry to hear that some attendees didn't get burgers at yesterday's event. Due to overwhelming interest we ran out 15 minutes earlier than expected."

Maybe Budweiser thought that the massive amounts of beer people were consuming would mute their need for more burgers?

We heard back from A-B. Here's the statement from Budweiser Vice President Brian Perkins, in its entirety:

"We whole-heartedly stand behind the integrity of the contest design and winner selection. The Bud & Burgers Championship incorporated consumer voting throughout the competition, including the semi-final events and the festival final. After festival attendees voted to determine the top 3 finalists, a panel of food & beverage expert judges chose the champion based on the burger's taste, originality, visual appeal, creativity, innovation, quality, compatibility with Budweiser, and relevance to the Bud & Burgers theme, as outlined in the contest rules posted on Budweiser.com/burgers. There could only be one winner in this competition, and we're excited to reward the well-deserved creator of the best burger in America."

We welcome tips and feedback. Contact the writer via email at emily.mccarter@riverfronttimes.com.