On June 24, Veronika Parson was making a routine stop at her bank in Midtown St. Louis when she happened to notice an old, abandoned warehouse.

It immediately grabbed the passionate urban explorer's attention. "There was a lot of graffiti on the side of the building so I knew it was empty and that, if nothing else, there would be some cool art to see," she says.

A longtime barista who's worked at Comet Coffee and Kaldi's, Parson discovered an unlocked door and began looking around, snapping photos to share with her fellow urban explorers. The structure had several walkways that encircled the barren room, heaps of metal and debris cluttered the muddy concrete. "There was a layer of mud on everything, I guess because of all the rain," she says.

She ascended a walkway that went outside the building, where she found a ladder up to the roof. She couldn't resist the urge. "Exploring these old buildings from the roof is kind of a novelty, to see the city views from that angle. I didn't even think twice about it," she admits.

But once she made it to the top, she sensed danger. "I took a few steps and in the very center of the roof; I saw a huge gaping hole that I didn't see at first. When I did, I immediately turned and headed back the way I came."

Parson took her first few steps back towards the ladder but she didn't get very far. She instantly felt a sinking sensation as she stepped on a soft spot and the ground gave way beneath her, sending her straight through the roof.

She fell nearly 30 feet -- the equivalent of three stories -- landing on one of the walkways inside the building. Remarkably, if she hadn't taken those first few steps, she might have missed it altogether, likely falling another 20 feet.

Her memory of events immediately following her impact is understandably a bit cloudy. She doesn't remember hitting the ground, but she must have been conscious, because she immediately began making phone calls. "I called my best friend and just said, 'Help me, I don't know where I am, I think I'm paralyzed," she recalls.

Using Google Maps, she sent a screenshot of her location to her friend, who helped paramedics find her. Parson spent the next six days in the hospital with lacerations, seven cracked ribs and a broken leg that required reconstructive surgery. Total recovery time for her injuries will span another two to four months.

The injuries are devastating. Not only is she unable to work, but she didn't have insurance at the time of the accident. Her medical bills could be astronomical.

But St. Louis' coffee community is doing what it can to help. 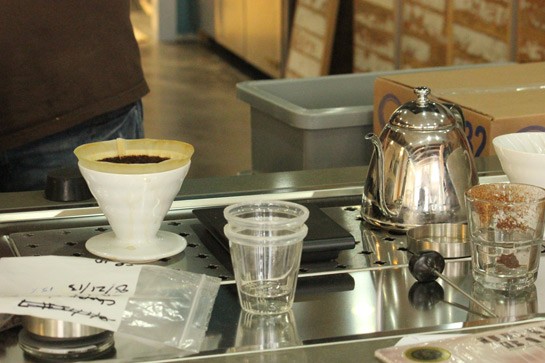 Matt Whitney, a barista at Comet Coffee, and Mike Marquard, owner of Blueprint Coffee, have developed a latte-art competition titled The Veronika Cup, to help raise the money Parson will need to pay rent, bills and medical expenses.

The Veronika Cup will be a series of three competitions, the first held tomorrow, July 11, at 7:30 p.m. at Blueprint Coffee (6225 Delmar Blvd., 314-266-6808). Any member of the public willing to make a donation toward Parson's recovery can sign up to create latte art using steamed milk.

"They'll make a bracket, and you'll go head-to-head against another barista," Whitney explains. "The judges will decide the winner of each bracket based on complexity, symmetry and definition. Judges will pick the latte they think has the better art, and that person will go to the next round until there's a winner."

The second event will be held at Rise Coffee House in The Grove in August, with the competition concluding at Comet Coffee in September. The events will be catered by Goia's Deli, Comet Coffee and Boulevard Brewery.

If you can't make the event or are squeamish about putting your artistic abilities on display, Whitney has created a GoFundMe account. "Basically, we're going to try to raise as much money as we can to help with medical bills and get her rent paid while she's not able to work," Whitney says. "All the coffee community knows Veronika, a lot of them pretty well, so we wanted to create a way for everyone to help out."

The love has not been lost on Parson.

"I've been really humbled and amazed by the response, both from co-workers and customers, and people who are just really wanting to help. It's really just blown me away," she says. "There have been people that I don't know well that have gotten involved to a level that I didn't expect. It's amazing how many of our customers at Comet aren't just customers. The relationship between the barista and the customer is very genuine. It's a really good community."

But though her adventurous afternoons have been cut short this summer, Parson has no plans to curb her urban exploring adventures in the future. In fact, she intends to return to the very warehouse that left her with broken bones. "It's the first thing I'm going to do," she smiles. "I want to see the hole, I want to see where I fell."

To give money, check out Whitney's GoFundMe page.