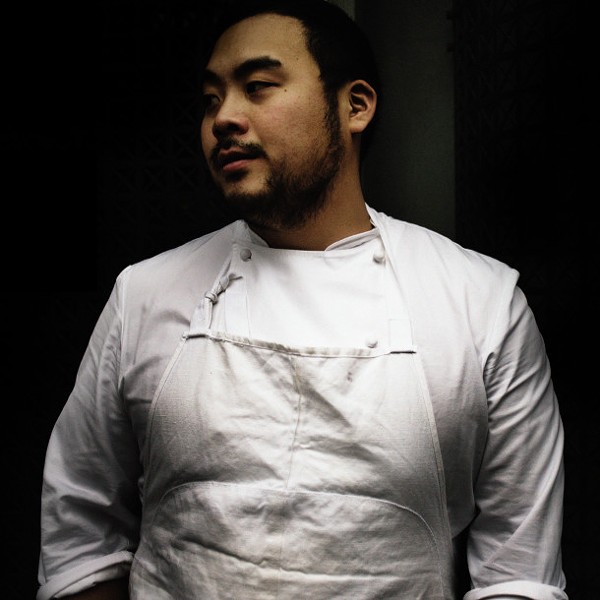 The acclaimed chef -- who hasn't been shy about his love of cheap lager -- jumped at the chance to be a part of the competition because it allows him a window into ways of cooking that he doesn't get to see in his kitchens. "As a professional chef you rarely get to see unconventional ideas that might actually be bad ideas," Chang explains. "You never get to pursue those ideas in the kitchen. I've been able to see some of those 'what I would never do' ideas, and they've actually turned out very well."

Chang is clear about what he is looking for in a winner. "My personal preference is something that is really plain. I don't want a salad on my burger. I want that on the side."

We could listen to Chang wax poetically about burgers, toppings and a proper cheese-to-bun ratio for hours, but let's be honest. We really want to know what thing: What does he think of St. Louis-style pizza?

"So one of my first employees -- I won't say his last name, but his name is Josh -- was born and raised in St. Louis," Chang recalls with a laugh. "I teased him for years upon years about the Cardinals -- not because they are bad but because I am jealous of the Cardinals organization and how they always have an amazing team. I would just make fun of him all the time about it."

Josh nobly held his head high in the face of Chang's ridicule, calling out Shake Shack for ripping off Ted Drewes and complaining about New York pizza. This weekend, Chang will finally see if his employee knows what he's talking about.

"I have never been to St. Louis but I feel like I know [the pizza]," Chang says. "I know it's not mozzarella cheese. I know its basically like matzah. That's what I always joked -- 'you're just eating matzah bread pizza, buddy.' But you know, in my head, I'm like, 'That sure sounds amazing.'"

Chang adds, "It sounds like cheesy cracker with amazing savory toppings on top. Processed cheese is amazing because it melts perfectly." He'll never admit it, though: "If I ever see Josh again, I will tell him that it's not very good. But I'm pretty sure that it's actually going to be."

So what will Chang be eating while he's in St. Louis besides burgers and pizza? A "bonafide concrete" is on the list, as well as some Bogart's barbecue. "St. Louis [is one of ]the epicenters of American barbecue -- I'm looking forward to finally seeing what makes St. Louis barbecue."

And of course, what visit to the Gateway City would be complete without a visit to Niche? "I'm also excited to finally eat at Gerard Craft's restaurants," Chang says. "I always love to see anytime someone does what they do in terms of opening a restaurant and having it be successful. That's something I want to taste and just pay respects."

Hopefully, Chang's meals at Bogarts and Niche will come before his first slice of Imo's -- he's not heeding our warnings about the molten Provel hazard that comes diving into a fresh-from-the-oven pie. "You're talking to somebody that has had some horrific facial injuries over the years because I can't stop myself," he explains. "I'm not going to lie. If I happen to get a pizza burn because of St. Louis pizza, it's going to be a badge of honor."